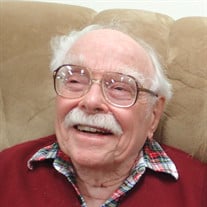 Irving E. Dayton Ph.D. January 31, 1927 - November 4, 2019 Irving E. Dayton was born on January 31, 1927, in Detroit, Michigan, and died November 4, 2019 at his home in Corvallis. He grew up in Mountain Lakes, New Jersey, where he graduated from high school as valedictorian. He excelled on the cross-country team and continued to run and hike throughout his life. Irv graduated from Swarthmore College in 1948 and earned a Ph.D. in physics from Cornell University in 1952. During his early career Irv taught physics at Princeton, worked for Babcock & Wilcox and was an assistant professor at Swarthmore. In 1961 he moved his family to Bozeman, Montana. He was head of the physics department at Montana State University from 1962 to 1966, Vice President for Academic Affairs at MSU from 1966 to1976, Acting Commissioner of Higher Education for the State of Montana from 1976 to 1981, and Commissioner of Higher Education from 1981 to 1985. He spent a year teaching physics in Malaysia and was acting president at Montana Tech for one year before retiring. Throughout his career he was well-known for his progressive ideas including unwavering support for the advancement of women’s education and career opportunities. In 1997 Montana State University named a conference room for him: The Dayton Physics Conference Room, located in the new Engineering and Physical Sciences building. In 2015 the Swarthmore College Bulletin announced that The American Association of Physics Teachers (AAPT) named Irving Dayton '48 a Fellow. The award honors those who have made exceptional contributions to enhance the understanding and appreciation of physics through teaching. Irv was also cited in several publications, including the Encyclopedic Dictionary of Physics and the American Institute of Physics Handbook Travel and eating gourmet food were two of his great loves. In 2008, he wrote to International Travel News stating that he qualified for its Seven Continents Award, listing 57 countries and the dates he visited them. His travels took him to all seven continents and included long distance cycling trips and treks in the Himalayan Mountains as well as a six week stay in India working for the Atomic Energy Commission. Attending classical music concerts and playing the bassoon were an important part of Irv's life. He was a passionate and accomplished outdoorsman and participated throughout his life in hiking and mountaineering, skiing, canoeing and cycling. One of his proudest accomplishments was hiking the Pacific Crest Trail for 4 to 6 weeks every summer after he retired, eventually completing the trail from Northern California through Oregon and Washington. His love for the outdoors is one of the most important legacies he shared with his five children. He retired in 1987 and he and his wife, Jean, whom he married in 1952, moved to Corvallis. She died in 2009. Survivors include his wife, Martha, whom he married in 2011; sister, Emily Slowinski, Minneapolis; children, Barry (Barbara), Ridgefield, CT, Peter (Colleen), Missoula, MT. Melissa Boyd (Randy) Redding, CA, Beth Dayton, M.D. (Jeff Jarvi) Salem, OR and Andrew, Renton, WA; 7 grandchildren and 8 great-grandchildren. A Celebration of Life will be held at 2 p.m. Saturday, Jan, 11, 2020 at the Unitarian Universalist Fellowship of Corvallis, 2945 NW Circle Blvd., Corvallis.

The family of Irving E. Dayton created this Life Tributes page to make it easy to share your memories.