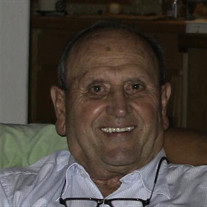 August 15, 1926 — October 9, 2017 Jack Casswell Cooper died in his home with his son, Rand by his side, the morning of October 9, 2017, from heart failure. Jack was 91. Jack was born in Portland to his parents Doris Marguerite Casswell and George Cooper on August 15, 1926, and grew up in Milwaukie, Oregon, on the outskirts of Portland. As a young man, he achieved the rank of Eagle Scout. Jack served in the U.S. Army Signal Corp during World II and discovered his future bride (of 65 years), Liz, when he was stationed at Fort Snelling in Minneapolis, Minnesota. Following their marriage in St. Paul, Minnesota on June 2, 1947, Jack whisked Liz off to Milwaukie where he attended the University of Portland earning a Bachelor’s Degree in Engineering. Following a job opportunity in heavy equipment sales, the family, which had grown by three, moved to Corvallis in 1959. Jack eventually purchased a variable speed control company, Flomatcher, which he ran, sold, bought back and resold. He then moved into real estate investing, which continued for the rest of his life. Sports were always a focus for Jack, especially golf, fishing and hunting, sprinkled with some tennis and skiing. Many family outings were centered on these activities where memorable stories would abound. Bridge was another pastime which Jack enthusiastically played as recently as four days before his passing. He truly enjoyed his many bridge pals and would often speak of their good-natured betting games. Jack was a kind, generous soul who quietly contributed to other’s lives. He loved all of his family deeply, participating in their worlds with assistance, wisdom and humor. In his words, “It’s been a great ride!” We will all miss him terribly! Jack was preceded in death by his parents and his wife, Liz. Survivors include his children, Jack C.K. (Jackson) Cooper, Leslie (Scottie) T. Cooper and Rand W. Cooper; their spouses Scottie Jean Cooper, Tom Leddy and Cassandra Cooper; seven grandchildren, and nine great-grandchildren. Per Jack’s request, no services will be held. Condolences and memories may be shared at demossdurdan.com.

The family of Jack Casswell Cooper created this Life Tributes page to make it easy to share your memories.