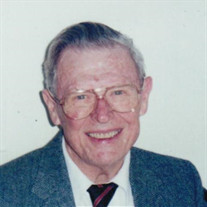 Jack Rettig passed away peacefully at Samaritan Hospital just 3 weeks before his 91st birthday. He was born to Adam J. and Clara C. (Rode) Rettig in Louisville, Ky. Jack’s formative years in Evansville, In. were a struggle. His parents died early, his mother of a ruptured appendix in 1933 and his blacksmith/mechanic father a suicide in 1937. Jack and Eileen, his younger sister, were then raised by their stepmother, Kathryn (Lang) Rettig. Jack worked from middle school through high school to help support the family and graduated as valedictorian from Central High School in 1942. After a short period in an Alameda, California shipyard working as an electrician, Jack joined the Navy at age 18 in June 1943 and fought in the Pacific, assigned to the battleship Alabama. He was aboard in Tokyo Bay on V-J Day, September 2, 1945. On December 1, 1945 following Jack’s return from overseas, June Alta (Hugger) and Jack married in Raleigh, North Carolina. They had met in Washington D.C. where she was a Navy WAVE. He courted her during visits to the city’s sights and long walks through Arlington National Cemetery. The couple moved to Evansville and enrolled at Evansville College under the GI Bill. June dropped out for the birth of their son Richard in November 1946. Jack continued school and graduated with a BS in Business in 1949. In 1950 the Korean conflict created manpower demands in the Navy and Jack was offered a commission. He accepted and was assigned to a destroyer, the USS Ernest G. Small, which he boarded at Inchon for active duty. Jack was released from active duty in San Diego and found administrative work there with General Dynamics. He enjoyed his work and the city, and the family remained there until 1958 when he decided to make a career change. Jack had earned an MS degree by attending night classes at San Diego State College where he became attracted by academic life. This led to his decision to quit his job, move to Los Angeles, and enter the PhD program at the UCLA. With indispensable encouragement and support from his wife June, who worked several jobs, Jack completed his academic requirements and received his PhD in Business in January 1961. Jack then accepted an Assistant Professorship in the Department of Business and Technology at Oregon State University. With wife June and son Richard, they moved to Corvallis in September 1961 where Jack remained at OSU until retirement as a Full Professor on January 1, 1987. During his years at OSU Jack focused on teaching but also served as chairman of his department, Director of the MBA Program, member of the Faculty Senate Executive Committee, Triad Club member and sponsor of numerous student groups. A Jack Rettig Scholarship Endowment Fund, established in his honor by former student, is one of the greatest satisfactions he received from a lifetime of teaching at OSU. Jack’s was also involved in civic and development activity as; member of Governor Tom McCall’s 5-man Task Force 70s project to improve state government, Ford Foundation Visiting Professor Case Method Program participant at Harvard and Collective Bargaining Program participant at the University of Michigan. A Fulbright Fellowship took him to Africa to serve as Director of the School of Administration at the University of Ghana. He published articles and his book Careers: Exploration and Decision, has been continuously in print since 1974. Jack’s retirement years were pleasant, especially the early ones, when he and June saw much of the world. They ultimately preferred travel to places where they felt welcome and where someone else did the driving. Several visits were made to Tokyo, where son Rick was living with his Japanese wife, Mico. Jack would have never guessed, that V-J Day when the Alabama sat at anchor in Tokyo Bay, that his son would marry a Japanese girl. Jack had a well developed sense of humor and loved exchanging jokes and stories with friends. He enjoyed classical music that was not too challenging and collected music from the Big Band era and folk songs of the ‘60s. He read widely and randomly and always enjoyed a good meal. He was preceded by the death of his dear wife, June, of 67 years in 2012 and survived by his son, Richard. Looking back, from humble beginnings Jack saw three careers: military, industrial and academic. Each had pros and cons, but everything considered, June and Jack have no regrets about the road they traveled.

Jack Rettig passed away peacefully at Samaritan Hospital just 3 weeks before his 91st birthday. He was born to Adam J. and Clara C. (Rode) Rettig in Louisville, Ky. Jack&#8217;s formative years in Evansville, In. were a struggle. His parents... View Obituary & Service Information

The family of Jack L. Rettig created this Life Tributes page to make it easy to share your memories.