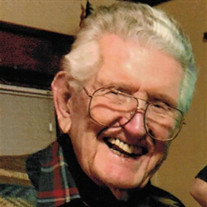 Jackson Weaver Ross, Jr., longtime Corvallis resident died from congestive heart failure at 97. Born July 31, 1920 in the Georgetown section of Washington, D.C. to Agnes Arnold Ross and Jackson Weaver Ross. Both parents worked for the U.S. Government. Jack attended Washington Lee High School in Ballston, Virginia for two years but graduated in 1938 from Central High School in Washington, D.C. At Central High he played football and was a member of the Cadet Corps. For three summers he was active in the Citizens Military Training Corps (CMTC), a horse cavalry division stationed at Fort Myer and Fort Belvoir, Virginia. In 1939 he began as a clerk at the FBI. Married Daisidel (Del) Slate December 1941. In 1942 was assigned as a "confidential file analyst" in the Legal Attaché's office in the U.S. Embassy in Rio de Janeiro, Brazil. While there, they apprehended German saboteurs who landed on the beach from a U-boat operating off the coast of Rio. In 1943 J. Edgar Hoover announced that FBI employees were no longer "frozen in their jobs" so he enlisted in the Army. After a brief six week basic training at Camp Blanding, Florida they were shipped out to Europe to join the 70th Infantry Division as replacements for those lost in fighting. Ironically, the 70th Division had been activated at Camp Adair, Corvallis, Oregon (a place Jack had never heard of before). While in basic training, Jack earned expert marksman as an antitank gunner with machine guns and 37 mm cannon. While in Europe, he served in 60 mm mortar sections. March 1945, while in Europe, first daughter, Susan, was born. In 1946, after discharge from the Army, he returned to the FBI in Washington, D.C. Shortly after, he moved wife and child to Tangent, Oregon, where his wife's parents were running an 80 acre farm. Second daughter, Nancy, (Dayana) was born in 1946. Jack and Del purchased the farm from her parents and developed a small dairy herd, selling milk to the Dairy Co-op in Salem. He was encouraged to attend Oregon State College in Corvallis under the GI Bill of Rights. They sold the farm and moved to North Albany. He earned a Bachelor of Science in 1951 as a Farm Crops major and was hired as a Seed Certification Specialist under Harold Finnell and Dr. Don D. Hill. In 1952 the family moved to Madras, Oregon where he was a Jefferson County Extension Agent. Third daughter, Peggy, was born shortly after. In 1955 the family moved back to Corvallis where Jack worked in a series of positions with the Extension Service: Farm Crops Specialist, Area Supervisor, Community Development Specialist and finally Assistant Director, County Programs. In 1959 he received a Kellogg Foundation Fellowship and earned a Masters Degree in Extension Administration at the University of Wisconsin, Madison. He retired in August 1975 at 55 years old as Assistant Director of Extension Administration. In 1982, after 41 years of marriage, Del died of cancer. Jack married Florence Marion Leber (Marnie), and after 28 years of marriage, she died of cancer in 2011. Jack continued to live in Corvallis and primarily through membership in Kiwanis, was heavily involved in volunteer community service activities. He was named Corvallis Senior First Citizen in 1994. The same year he and Steve Besse went on assignment to Belarus for Volunteers in Overseas Cooperation Association (VOCA) an AID affiliate. He enjoyed 22 years as "mole man" – doing rodent control at Trysting Tree Golf Course. Jack was honored for 28 years of service with Meals on Wheels and a few weeks before he passed, he and fellow Kiwanis members, were still installing grab bars for people in need of assistance. He left his mark on Corvallis Christmas decorating by being the consummate Christmas light repairman for everyone, including the Pastega Christmas Lights Display, and many others who brought him their broken strings of light. For recreation in addition to golf, he enjoyed woodworking projects, travel, family gatherings, repairing and recycling everything, in addition to operating his computer and keeping up with family members. He was preceded in death by his parents, brothers William and Donald Ross, and both wives. He is survived by daughters, Susan McNutt, Peggy Mullett (husband, Michael) of Corvallis, Dayana Jon Patterson (husband Don) of Silver City, New Mexico and Harriett McKim Smith (husband, Justin) of Eugene, OR. Grandchildren: Matthew Wheeler, Lebanon, OR; Rebecca Simmons (husband Jud) of Lynchburg, Virginia; Ruth Wheeler, of Austin, Texas; Jaya Thompson of Hillsboro, OR; Christopher Thompson of Portland, OR; Antoine Farman of South Korea; Cami Farman of Corvallis, OR. Great Grandchildren: Joshua Greenough of Corvallis, OR, Jack Simmons, and Henry Simmons of Lynchburg, Virginia; Izzy and Tehina Wilson of Corvallis. Many beloved nieces and nephews as well as close friends he considered relatives. The family wishes to thank the many wonderful caregivers at Evergreen Hospice House in Albany for making his last week comfortable. At his request, a private family service will be held. If desired, memorials may be sent to the Boys & Girls Club for the Jackson Ross memorial bench & flower box,1112 NW Circle Blvd, Corvallis, OR 97330 or online at www.bgccorvallis.org.; Vina Moses Center, (www.vinamoses.org) or other charity of your choice. Arrangements were made with DeMoss-Durdan Funeral Home and Crematory, www.demossdurdan.com

The family of Jackson W. Ross created this Life Tributes page to make it easy to share your memories.