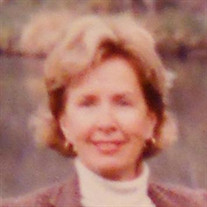 Jacqueline Rea Jones Lee Gerland passed from this life on May 13, 2018, Mother's Day. Born February 28, 1927 in Orange, Texas, to parents William Grady Jones and Etta Mae Crossley, followed later by her brother, Roger Jones. After graduating from San Jacinto High School, Houston, Texas, she moved to Los Angeles, California, to work as part of the war effort assembling fighter planes. With the war's conclusion, she moved to Oahu, Hawaii, marrying Robert C. Lee, a U.S. Marine. Returning to Houston to begin their life together, they had three sons. After a successful career as wife and mother, and graduation from the University of Houston in 1970, she taught in public schools in Houston, Texas, and Turkey Ford, Oklahoma. She wed M.K. Gerland of Freeport, Texas, a local grocery store owner in 1976. Following M.K.'s death in 1988, she followed her two younger sons in 1989 and migrated to Oregon, establishing a miniature horse ranch outside of Sisters, Oregon, in partnership with her youngest son, Mark. Five years later, missing city life, she moved into the picturesque town of Sisters, becoming a respected member of the community. She volunteered at the Sisters Chamber of Commerce, the Sisters Thrift Store, and the Sisters Public Library while her crowning achievement was as a member of her much-loved Posse. Sharing adventures with her lady friends while traveling the world, from Europe to Asia, around Cape Horn, throughout Canada and Oregon, she served as a role model for her friends and family. Her enthusiastic engagement with the world was infectious to all. Family surviving Jackie are brother Roger Jones and wife Janet, sons Robert Lee, Jr. and wife Yvonne, John Michael Sun and partner Susan Dobra, Mark Lee and wife Helen Redfield. Also surviving are grandchildren Amie Kane-Lee, Emily Kane-Lee and wife Allison Kramer, Skyler Sun, Kayin Lee, Kalin Lee and wife Marissa, Niya Lee and husband Alex Goldner, and six grandchildren. All in all, not bad. In lieu of flowers, donations may be made in her memory at your local library. Please share your thoughts and memories for the family at www.DeMossDurdan.com

The family of Jacqueline Rae Gerland created this Life Tributes page to make it easy to share your memories.

Jacqueline Rea Jones Lee Gerland passed from this life on May...