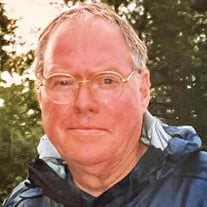 James Stuart Fleming, of Corvallis, Oregon, passed away on June 6, 2022 following a brief illness. Jim was born January 19, 1942, to Robert Ernest and Rowena (McLean) Fleming in Silverton, Oregon. Moving to Corvallis at a young age Jim graduated from Corvallis High School in 1960. After attending Oregon State University, graduating in 1968, Jim served in the United States Army from 1968 to 1970, stationed in Fort Carson, Colorado. Following a brief stint teaching high school, Jim and a childhood friend founded and operated two successful businesses, first in Sisters, OR and later in Halfway, OR. Jim returned to western Oregon and teaching in 1989. Jim taught for the most part at Benson Polytechnic High School in Portland, retiring in 2004. He spent his retirement in Cheshire, OR moving back to the Corvallis-area in 2017. Jim enjoyed carving wood, an adventure that began with shorebird figures and continued with waterfowl and fish decoys. He also enjoyed hunting, fishing and running, finishing 20 marathons during his lifetime. Jim is survived by this son, Robert James and his wife SaraAnne (Pettee) of Alaska; brother Robert Bruce Fleming and his wife Caroline (Budgett) of Mist, OR; niece Heidi (Fleming) Bodine of Fresno, CA and nephew James D Fleming of Lake Oswego, OR. He was preceded in death by his parents Robert and Rowena. A special thank you to Anne Fleming, Heinz Croes and James D Fleming for their loving care and support during his final days. No Memorial service is planned. Demoss-Durdan Funeral Home and Crematory is handling arrangements,

The family of James S. Fleming created this Life Tributes page to make it easy to share your memories.

James Stuart Fleming, of Corvallis, Oregon, passed away on June...