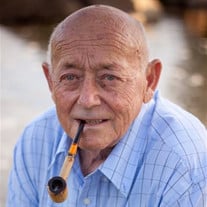 James Edward Fredette 1931 – 2018 Jim was born in September of 1931 in Gardner, MA to Leon and Victoria (Norskey) Fredette and passed away August 6, 2018 in Corvallis Oregon. His family lived in Gardner and Templeton where Jim and his two brothers, Paul and Doug, attended school. During the Great Depression the three brothers helped with the family farm in Templeton and held jobs to contribute to family expenses. In high school Jim worked at a dairy farm down the road and had a great affinity for his pet heifer named Daisy. Jim graduated from Templeton High School in 1949 and then moved on to Worcester Trade School where he learned to make wood patterns for castings. In 1951 (Korean War) he joined the Navy in the Construction Battalion and served in Morocco and Cuba. In January of 1956 he married Anna Masiello and a day following their wedding they packed their belongings and moved to Corvallis, OR, where they started their family. Michele was born in 1957, Michael in 1958 and Kimberly in 1961. Jim worked in the construction trade in Corvallis for decades. He built many, many homes in the Corvallis area and was well known for his quality craftsmanship. In 1966 he was recognized with an award for Special Excellence in his work by the American Institute of Architects. Jim specialized in finish carpentry, building beautiful staircases and balustrades. He enjoyed randomly placing small time capsules inside box newels or in walls of those homes. Jim was an avid outdoorsman and fisherman. He fished for salmon in the ocean outside of Yaquina Bay, and off Vancouver Island. He also enjoyed clam digging in Toledo Bay. He hunted deer and elk for many years with his long-time buddies. He called himself ‘chief cook and bottle washer’ on those trips and loved ‘feeding the troops’. Jim was an excellent cook and could feed large groups of people at home, on camping trips, family gatherings and always made it look easy. Jim was a voracious reader and loved poetry. He took great delight in conversing with anyone in other languages and could speak a bit of Latin, French, Finnish, Polish and Italian. Jim was a lifelong member of the Elks. In his last few years he enjoyed the company of his dear companion, Rita Taylor. Jim is survived by his brothers, Paul and Doug; sister in law, Barbara; his son, Michael Fredette; daughters Michele (Jim) Bruer, and Kimberly (Michael) Gray; his grandchildren Jennifer, Melissa, Lisa, John, Sarah, Jessica, Kenton, Travis (Kristy) and great-grandchildren Austin and Taylor. A Celebration of Jim’s life will be held at 2:00 pm on Saturday, October 2018 at Corvallis Elks Lodge,1400 NW 9th Street, Corvallis

James Edward Fredette 1931 &#8211; 2018 Jim was born in September of 1931 in Gardner, MA to Leon and Victoria (Norskey) Fredette and passed away August 6, 2018 in Corvallis Oregon. His family lived in Gardner and Templeton where Jim and his... View Obituary & Service Information

The family of James E. Fredette created this Life Tributes page to make it easy to share your memories.

Jim was born in September...