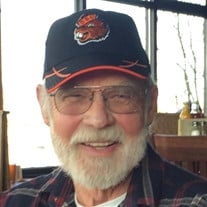 James Oliver Ohren Feb. 22, 1936-Sept. 11, 2018 James Oliver Ohren was born in Fosston, Minnesota to Oliver and Beatrice Ohren on February 22, 1936. He was the first born of the four Ohren children: Jim, Gary, Joan & Tom. The family moved in September of 1944 to Silverton, Oregon. Jim graduated from Silverton High School in 1954 and in the Fall of that year he enlisted in the US Air Force. He proudly became a part of the 11th Tactical Missile Squadron. He served during the Cold War as a "launcher technician" on the TM61 Martin Matador Missile. As part of Jim's training, he was involved with live launches at Cape Canaveral, Tripoli, and North Africa. He was stationed in Germany for 2 years and drove a 10-ton tractor pulling a 42 ft launcher all over Germany. In September of 1958 Jim honorably completed his enlistment and returned home to Silverton, where he was reunited with Janet Kallis who would become his wife. In December of 1958 Jim and Janet were married in Silverton, Oregon at Trinity Lutheran Church and began their life together in Corvallis, OR. Jim attended Oregon State University and received his Bachelor of Science in Elementary Education in 1962. He started teaching at Jefferson Elementary and went on to teach at Dixie, Western View and Cheldelin. While teaching, Jim also coached numerous sports. He went to night classes and summer school until he earned his Master’s Degree in Education. Jim and Janet were for many years leaders in Lutheran Marriage Encounter. After a long career in education, Jim sold insurance for Gene Keil & Associates. He later began working at Wayne Buck Chevrolet where his son, Jeff, was also employed. Jim's next employment was at Stone Forrest Industries where his daughter, Janel, was also employed. In 1995 Jim purchased FCI, an auto parts business that is now called PARTS NETWORK and is presently being run by his son & wife, Jeff & Carrie Ohren. Jim and Janet have attended Suburban Christian Church for many years. In 1968 Jim and his wife bought their home on the Alsea Hwy, located just outside of Philomath, and they spent the next 50 years renovating this home. When it came to home remodeling, they could pretty much do anything together. For their 50th wedding anniversary, Jim and Janet bought a nice fishing boat and spent the next 10 years enjoying Odell Lake and building relationships with the many special people that fish there. Jim is survived by his loving wife of almost 60 years, Janet. His son, Jeff (Carrie) Ohren; daughter, Janel (Kevin) Hoffmann; grandchildren, Ben (Liz) Hoffmann, Nathan (April) Hoffmann, Mariah (Mike) Keldorf, Quianna Ohren, Nakkitta Abadilla, Sammy (Carolina) Abadilla; great grandchildren, Kaden, Cohen, Raynor, Kalani and Ahsoka. He is also survived by his siblings Gary (Nancy) Ohren, Joan (Art) Balczarek and Tom Ohren. There will be a celebration of life at 11:00 am on Saturday the 29th of September at Suburban Christian Church, immediately followed by a military memorial at Mount Union Cemetery and finally, a gathering at Jim’s house to honor him. If you knew him, please attend, he always loved getting people together. In lieu of flowers, donations can be made to the Mount Union Cemetery Association, P.O. Box 1025, Philomath, OR 97370. The cemetery is a non-profit corporation that relies on volunteers to manage and maintain (mow & weed whack)...... and you know, if Jim were here, he would be cutting the lawn and maintaining the grounds. Janet wishes to donate an entrance sign for the cemetery with a plaque acknowledging Jim for the donation. In recent years Jim volunteered for "Take a Veteran Fishing" and "Candlelighters for Children with Cancer". Please leave your thoughts and condolences at www.demossdurdan.com

The family of James Oliver Ohren created this Life Tributes page to make it easy to share your memories.