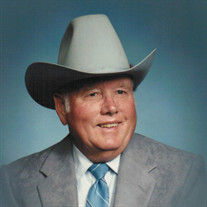 JAMES WILLIAM PATTERSON James William “Jimmy” Patterson died April 19, 2015, surrounded by family. He was 88. He had been expecting an angel to tap his shoulder and say “Come with me son, it’s time to go home” for quite some time. Jimmy was a family man, WWII veteran, a member of the Greatest Generation, cowboy, trucker, and story-teller. Jimmy was born on July 21, 1926, in Justin, Texas, to Jessie May Cole Patterson and Olin Patterson. He spent the first 16 years of his life in rural Texas. It was the depression, times were tough, and everyone worked. Jimmy recalled getting a red wagon one Christmas…but it wasn’t a toy. He used it to bring in wood chips for the cook stove. He practiced his reading with the Bible his Uncle Johnny, a traveling preacher gave him. Jimmy was only eight years old and his brother, Jerry four, when their father drowned during a flash flood in Oklahoma during a Thanksgiving visit. After Olin’s death, Jessie and her sons lived with Olin’s parents, Callie and Sam Patterson. Grandpa Sam taught Jimmy how to care for livestock, raise crops, drive a team of horses or mules, and plow fields, and to drive the Model T Ford. Jimmy drove the family to church on Sundays, either in the Ford or in wagon if the Model T refused to start. He also recalled camping out and picking cotton with his mother and Jerry and that his Grandma Callie was a great cook. Jimmy attended school through the eighth grade. His teacher, Miss Holland made him stay after school to perfect his handwriting and spelling, she tried, but she never managed, to teach him music. Jimmy had been driving for years and when he turned 14, he was finally old enough to get a driver’s license. He drove into town and parked at the Wise County Courthouse. Inside he told the Sheriff what he wanted. The Sheriff asked him to go out and drive around the block. Jimmy replied, “Well I just did that”, but he did as asked and when he returned, the Sheriff issued him his first license. Jimmy was always looking for ways to make his own money. He and a friend started a business chopping fire wood and driving it into town to sell. “Mac & Pat” shared the work, and split the profits, although Jimmy’s share was often spent on ice cream. Jimmy also had a Jersey cow named “Shorty” and he made good money selling the milk and cream. After 8th grade, Jimmy hired on as a ranch hand for Mr. Tom Fox. For this he received room and board and $30 a month. On his day off, he’d go in to town for church and an ice cream cone. It was a good job, a man’s job, and Jimmy decided to keep it and not return to school. The family came to Oregon after Jimmy’s stepfather, Jack Rose, was transferred to Camp Adair to train army recruits. Jimmy was about 16 when he drove them all cross country. Once here, Jimmy got a job driving truck and building roads at Camp Adair. After getting some experience he then got a job with Benton County driving dump truck. When Jimmy got his draft notice in 1944, he joined the Navy. His construction experience landed him a spot in the SeaBees. He operated landing craft and built roads on Okinawa. He never expected to survive the experience. He wrote his Mother a letter from Okinawa sending home his pay and advising Jerry to get the car repaired. He promised to send home more money and he hoped someone would buy him a pair of silver-plated spurs. After World War II ended Jimmy returned to Texas for a brief time, before making Oregon his home. After meeting at a Valentine’s Day dance in Philomath, he married Lucy Ann Shroyer in 1950. They raised their family in Corvallis and they all enjoyed horses and motorcycles, and a busy family life. They later divorced after 35 years. Jimmy owned his own log truck for 25 years, hauling for George Shroyer Logging. Later he drove dump trucks for Corvallis Sand & Gravel. He also drove long-haul. He was very proud of his driving record and holding a commercial driver’s license for 69 years. He taught both his sons to drive and they both worked in the trucking industry. They loved to share their trucking stories. Jimmy loved his family, those big shiny trucks, motorcycles, a horse with a fast walk, and a smart dog. He was known for his excellent memory, his perfect penmanship, his skill with trucks and equipment, and his story telling. He could never pass up a bowl of ice cream or a strawberry milkshake. He was loved and will be greatly missed. “Heroes get remembered, but legends never die.” Jimmy was preceded in death by daughters Pamela and Marcella Patterson, son Randall Patterson, grandson Spc. Cody James Patterson, and his brother Jerry C. Patterson. Jimmy is survived by his daughters, Lori Anderson and Kim Holt (James), son Jeffrey Patterson (Debby); grandchildren Jessica Anderson Clark (David), Nicole Patterson, Ashley Hill, Justin Anderson, Taylor Patterson, Megan Patterson, Jake Patterson, Alicia Holt, and James “Manny” Holt; four great-grandchildren, Dylan Mendell, Asia Minor, Kaden Leatherman and Chloe Dustman; nieces, Kathy Patterson, Lou Ann Gray, and Theresa Lynn Patterson; nephews, Jerry Daniel Patterson, Charlie Patterson, and Jerry Paul Patterson, and a large extend family. Visitation is Friday evening, April 24th from 4:00 pm until 6:00 pm at DeMoss-Durdan Funeral Home located at 815 NW Buchanan Ave, Corvallis, OR. Graveside service with military honors Saturday, April 25th at 9:30 am at Oak Lawn Cemetery 2245 SW Whiteside Drive, Corvallis, OR 97333 followed by a memorial service at Peace Lutheran Church in Philomath at 2540 Applegate Street, Philomath at 11:00 am with a light lunch to follow. Instead of flowers, the family suggests contributions to the Cody James Patterson Memorial Scholarship Fund administered by Philomath Community Foundation at PO Box 1334, Philomath, Oregon 97370. Please share your thoughts and memories for the family at www.demossdurdan.com

The family of James William Patterson created this Life Tributes page to make it easy to share your memories.