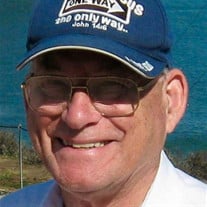 Pastor James W. Rehley of Corvallis Oregon, age 85, left this earth to be with his personal Lord and Savior, Jesus Christ, on the morning of Friday, February 9, 2018. He was the second child and first son of James and Helen Rehley, and was born in Palmer, Massachusetts on April 2, 1932. He was proceeded in death by his father James, and mother, Helen. James grew up in Palmer Massachusetts – he was an active and industrious young man. He started his own newspaper, writing stories and taking photos, producing and distributing the paper to neighbors, friends and family. He loved spending time with his grandfather in the outdoors, hiking and fishing. In high school he began serving in the Palmer Fire Department as a volunteer. He graduated in 1949 and promptly tried to enlist in the Navy, but was turned down for ear problems. In 1950 he tried to enlist in the Air Force, but was again declined for his ears and a heart murmur. In 1951 he was finally accepted into the Air Force. During his years in the Air Force James saw a movie on the life of Martin Luther- this movie started James thinking about entering the ministry. While stationed in Iceland in 1955 his F89 plane crashed in the sea – killing the pilot. While going down he commended his life into the hands of the Lord. God miraculously preserved him for a life of service. James spent 18 months recovering in the hospital following the crash. He was honorably discharged after 7 years of service to our country in the US Air Force. James went on to Concordia Seminary in Springfield, IL and became a Pastor in the Lutheran Church Missouri Synod - serving His Lord for 55 years in ministry to many churches in North Carolina, South Dakota, Washington and Oregon. He met his future wife Marilynn while he was studying at the Seminary. They married on August 21, 1960, and enjoyed 57 years as husband and wife. Together they raised a family; teaching their children the love of the Lord. He created a household of joy, laughter and happiness. James' main interest in life was proclaiming the gospel message. He was also interested in music, both listening and participating - by singing and playing piano, guitar, and recorder. He loved comedy. Laurel and Hardy, Peter Sellers, and The Simpsons were favorites. James liked travelling, especially to historic sites around the United States, Europe and Israel. He loved to study of history, with a special interest in WWII. James looked forward to church potlucks and buffets. James leaves behind his loving, faithful wife and helper of 57 years, Marilynn, his sisters Jean Robinson and Ann Chamberlain, and brother Robert. He also leaves behind children Paul, John (Cheryl), Ruth (Chris), Peter (Lucia), and Mark (Melissa). His grandchildren are Emily and Nathan Pond, Leo and Josie Rehley, and Jaerod Case, and great-grandchildren Autumn Bolton and Raiden Case. The Memorial Service will be held at Zion Evangelical Lutheran Church on Saturday, March 17 at 11:00 am. Reception to follow. If you cannot attend the service but would like to share a memory of Pastor Rehley to be read at the reception following the service, please send your comments to Zion Lutheran Church, 2745 NW Harrison Blvd., Corvallis, OR 97330, attention: John or Marilyn Rehley, or you may send an email to [email protected] In lieu of flowers memorial contributions may be made to: Zion Lutheran Ministries - Zion Lutheran Church, 2745 NW Harrison Blvd., Corvallis, OR 97330 -or- Kazakhstan Ministry - checks should be made out to "Grace Lutheran Church" with Kazakhstan Ministry on the memo line -or- Jesus is Lord Mission Society - checks should be made out to "Jesus is Lord Mission Society"

Pastor James W. Rehley of Corvallis Oregon, age 85, left this earth to be with his personal Lord and Savior, Jesus Christ, on the morning of Friday, February 9, 2018. He was the second child and first son of James and Helen Rehley, and was... View Obituary & Service Information

The family of Rev. James William Rehley created this Life Tributes page to make it easy to share your memories.