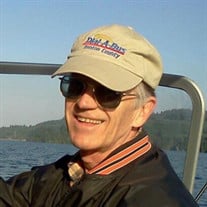 On Thursday, April 14, 2022, James Edward Reichwein, father, husband, veteran, and friend, passed away at the age of 75. Jim was born September 13, 1946, in Locust Gap, PA to John and Catherine (Gallagher) Reichwein. He later moved to nearby Mount Carmel, PA. Jim graduated from Mount Carmel Catholic High School in 1964. That same year, his love of airplanes and desire to see the world led him to join the United States Air Force. He completed technical training at Kessler Air Force Base in Mississippi and was then assigned as an Electronic Digital Computer Repairman at Adair Air Force Base. On May 26, 1967 he married Susan Claire Hoskins. That same year, Jim received orders for U-Tapao Airfield in Thailand where he worked as an Electronic Computer Repairman servicing the Univac 1004 Computer installed in the base communications center, supporting air coverage for the Vietnam War. Jim’s 21 year Air Force career continued to take him around the world. He was stationed at Cheyenne Mountain as an Electronic Digital Computer Repairman with Maintenance Control at NORAD, at Timaru, New Zealand as an Electronic Computer System Repairman responsible for repairs to the Baker-Nunn Spacetrack System at the Mt. John Observatory, at Eglin AFB in Florida as an Electronic Computer Systems Technician for the 728th Tactical Control Squadron, and lastly at Seattle, Washington where he served as an E-3A Logistics Computer Systems Technician and Logistics Computer Display Systems Acquisition Manager for the E-3A Joint Test Force, part of the USAF Tactical Air Warfare Center. Upon retiring from the Air Force, Jim and Susan returned to Corvallis, Oregon where Jim began a second career working for CH2M Hill in their computer center until it was relocated to Colorado. He took advantage of the GI Bill to attend classes at Linn-Benton Community College where he obtained an associate degree in business. Jim was an active member of the Chemeketans hiking group and had a passion for the outdoors. He enjoyed photography, travel, hiking, camping and fishing. He led wildflower hikes on Iron Mountain and other areas. Jim was always active. He volunteered as a driver for Dial-A-Bus. He also founded a group called the Wellness Walkers and led short easy walks for patients recovering from cancer or other ailments. He was known for his kind and compassionate heart. Jim was preceded in death by his parents, John W. and Catherine Gallagher Reichwein, his sisters Rose Marie O’Brien, Margaret Shannon, Anna Bosco, and his brother Elwood Krapf. He is survived by his wife Susan C Hoskins Reichwein, his two children, Sonya (Reichwein) McIntosh and James Dustin Reichwein, his sisters Dorothy Wright, Shamokin, PA, Mrs. David (Catherine) Fantini, Mount Carmel, PA, Theresa Cimino, Ephrata, PA and many nieces and nephews. Jim was diagnosed with Alzheimer’s disease in 2014. This terrible disease stole his memories and the last years of his life. DeMoss-Durdan Funeral Home is handling arrangement. Please leave condolences for the family on their website. In lieu of flowers, the family encourages donations to the Cure Alzheimer’s Fund through their website www.curealz.org

On Thursday, April 14, 2022, James Edward Reichwein, father, husband, veteran, and friend, passed away at the age of 75. Jim was born September 13, 1946, in Locust Gap, PA to John and Catherine (Gallagher) Reichwein. He later moved to nearby... View Obituary & Service Information

The family of James Edward Reichwein created this Life Tributes page to make it easy to share your memories.