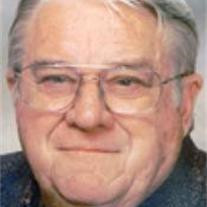 James Terrence “Terry” Kelley of Corvallis passed away Wednesday, Nov. 7, at Corvallis Manor from complications due to cancer and chronic obstructive pulmonary disease. He was 75. Terry was born in Torrington, Conn., to James William and Marguerite Beatrice Conlon Kelley. He spent 20 years in the U.S. Air Force and attained the rank of Master Sergeant. He worked in radar at various sites in Canada, New York, Alaska, Montana, Oregon and California. He cross-trained in computers and was involved with some of the first computing systems used in the country. Terry met his future wife, Elaine R. Hudson, while stationed at Beaverlodge Air Force Station in Alberta, Canada. From 1964 to 1969, he was stationed at Adair Air Force Station, where he developed a lifelong love of Corvallis, the Willamette Valley and Oregon. Following his retirement from the Air Force in 1976, he returned to Corvallis and worked at the Oregon State University Milne Computer Center until retiring in 1997. After his final retirement, Terry volunteered for Dial-A-Bus and Friends of the Library and delivered library books to shut-in patrons of the library. Terry and Elaine loved to travel, and visited Austria, Belgium, England, France, Germany, Ireland, Italy, the Netherlands and Scotland, as well as most of the U.S. states and Canadian provinces. He also enjoyed fishing, crabbing, golf, reading and garden railroading. Terry is survived by his wife, Elaine R. Kelley of Corvallis; son, Michael T. Kelley of Portland; daughter, Kathryn M. Jolliff of Albany; siblings, Vincent D. Kelley of Fischers, Ind., and Margaret P. Kulinski of Torrington, Conn.; and grandchildren Emily Renee and Andrew Thomas Jolliff. A memorial Mass will take place at 11 a.m. Monday, Nov. 19, at St. Mary’s Catholic Church in Corvallis. The Rev. Steve Clovis will officiate. A reception will follow at Corvallis Evangelical Church, 1525 N.W. Kings Blvd. in Corvallis. In lieu of flowers, memorial contributions can be made to Benton Hospice Service.

James Terrence “Terry” Kelley of Corvallis passed away Wednesday, Nov. 7, at Corvallis Manor from complications due to cancer and chronic obstructive pulmonary disease. He was 75. Terry was born in Torrington, Conn., to James William and... View Obituary & Service Information

The family of James Terrence Kelley created this Life Tributes page to make it easy to share your memories.