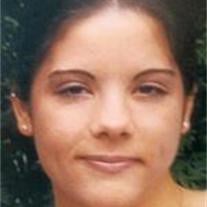 Corvallis resident Jana Leigh Ricken passed away in her sleep the night of Nov. 7, 2010. She was 29. She was born Jan. 10, 1981, in San Jose, Calif., to Paul Leonard Ricken of Novato, Calif., and Judith Lynn DeWall (Harvey) of Corvallis. Jana grew up an active child, involved in church activities, with the Salvation Army. Music was a big part of her life, as she played the cornet and sang in junior, youth and adult choirs. Home-schooled fourth through eighth grades, Jana then excelled in ninth through twelfth grades, graduating Class of 1999, Parkrose High School in Portland. She obtained a phlebotomy certificate from Linn-Benton Community College, and attended Oregon State University, majoring in fish and wildlife science. Jana's hobbies included fishing, hunting, camping and just being out-of-doors. Her favorite place was the Harvey family cabin in Detroit Lake. She loved caring for her dogs and cats, and enjoyed the nature found in Oregon's wilderness. Travel brought joy to Jana, as she traveled extensively as a child and young adult, experiencing car, train and plane travel throughout the United States and Europe. Jana is loved by all who knew and know her. Her faith in God sustained her, and she was always willing to share the saving grace she found in Jesus. Our earthly loss is certainly God's gain. She will be terribly missed by both family and friends. She had far too much living still to do. She was preceded in death by grandma Violet Ricken and aunt Patti Snider. Survivors include her parents; half-sister Ariana Marie Ricken of Novato; grandpa William Ricken of Lakewood, Colo.; grandparents Bruce and Dorothy Harvey of Tucson, Ariz.; three uncles; four aunts; seven Ricken cousins and six Harvey cousins; stepfather Gary DeWall of Corvallis; stepmother Hushtolakpi Ricken of Novato; stepbrothers Tim and Nick DeWall of Corvallis; and stepsister Briana Griffin of Vallejo, Calif. Private memorial services will be held in 2011. Donations can be made in the name of Jana Leigh Ricken to the Salvation Army, Camp Homelani, 68-243 Olohio St., Waialua, HI 96791.

Corvallis resident Jana Leigh Ricken passed away in her sleep the night of Nov. 7, 2010. She was 29. She was born Jan. 10, 1981, in San Jose, Calif., to Paul Leonard Ricken of Novato, Calif., and Judith Lynn DeWall (Harvey) of Corvallis.... View Obituary & Service Information

The family of Jana Ricken created this Life Tributes page to make it easy to share your memories.

Corvallis resident Jana Leigh Ricken passed away in her sleep...