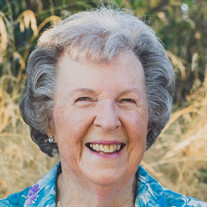 Janice Kriese Tobias Carpenter June 13, 1927 - December 5, 2015 Janice Carpenter, longtime Corvallis, Oregon resident and volunteer, died peacefully at her home Saturday, surrounded by family. She was 88. Janice was born to Josephine (Haack) and Arthur F. Kriese and raised in Modesto. She was the third of four children. Janice graduated from Modesto Junior College where she also began dating her first grade classmate, Richard Tobias. They married in Modesto on June 19, 1948. Janice and Richard moved fairly often for the first 10 years of their marriage, following Richard's education and architecture career until finally settling in Corvallis, Oregon in 1966 with their five children. Once in Corvallis, Janice began her long term love of volunteering for Good Samaritan Hospital, starting with the coffee cart and ending in the gift shop (her favorite job!). She spent over 45 years and earned over 10,000 hours volunteering at Good Samaritan. Richard and Janice divorced in 1970 and Janice began working as a bookkeeper, first for Flomatcher Inc. and later for Beaver Plumbing. While working at Flomatcher she was introduced to Raymond Carpenter and they married in Corvallis on June 10, 1975. They enjoyed dancing at the Elks Club and cooking at home together — mostly Ray cooking and Janice appreciating his fine cuisine! Ray preceded her in death in 1993. Janice was also a 23-year member and long-time treasurer for the Willamette Valley Supper Club, and a founding member of the Corvallis PEO Chapter FU. She spent many happy years babysitting and spending time with her cherished and adored Corvallis granddaughters, Rebecca Wolfe and Annette Patton. Janice was fiercely independent and loved working in her yard, maintaining it all until her health forced her to quit. She dearly loved all of her children and grandchildren and looked forward to family parties, get-togethers and holidays. She was always the first to arrive and the last to leave! Survivors include her five children: William “Kipp” Tobias (Thom Whittier), Richard Lynn “Rick” Tobias (Diana Delacerna), David Arthur Tobias, Mitchell Terence Tobias (Rhonda), and Julie Anne Weiss (Kent); three granddaughters: Rebecca Dalene Wolfe, Annette Irene Patton and Marissa Marie Tobias; brother and sister-in-law Jack and Winnie Kriese and sister-in-law Mae Kriese, all of Modesto; sister JoAnn Gerfen of Santa Maria, California; and many nephews and nieces. She was preceded in death by her brother Bob Kriese. Janice’s sunny smile, fun sense of humor and cheerful kitchen will be dearly missed. A memorial service will be held Wednesday, December 30 at 1:00 pm at the DeMoss-Durdan Chapel, 815 NW Buchanan Avenue, Corvallis, Oregon. Contributions in her memory may be made to Evergreen Hospice Care: AGH Foundation, Attn: Evergreen Hospice, 1046 6th Avenue SW, Albany, OR 97321 or a charity of your choice.

The family of Janice K. Carpenter created this Life Tributes page to make it easy to share your memories.