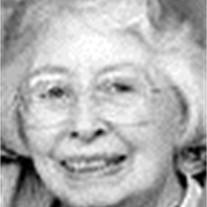 Jean Dayton of Corvallis died on March 30 from complications of strokes and Alzheimer’s disease. She was 84. Jean was born in Brooklyn, N.Y., on Dec. 30, 1924, the fourth of five daughters of Louis and Anna Klein. During high school she was active in the Science Club and worked as a volunteer at the Bronx Zoo, the Staten Island Zoo and the American Museum of Natural History. She graduated from Erasmus High School in 1942 and entered Cornell University that fall, one of the first women to major in conservation. She married Henry Hurwitz Jr. in 1944 and they moved to Los Alamos, N.M., where he was a member of the theoretical division and she was a technician in the Manhattan Project. They later divorced. Back in New York, she worked as a lecturer for the Atomic Energy Commission at the American Museum of Natural History before returning to Cornell in 1951, this time majoring in journalism. On Oct. 18, 1952, she met Irving Dayton at a graduate student mixer dance, and they were married two months later on Dec. 18, 1952. For the next nine years they lived in various states in the eastern U.S., following his career. In 1961 they moved to Montana, where her husband was an administrator in the Montana University System. In Bozeman she was active in many organizations, was a member of the founding Board of Directors of the Museum of the Rockies, wrote newspaper feature articles, made science presentations at one-room schools, helped start a cross-country ski club for women, helped clear and blaze cross-country ski trails and wrote the cross-country ski guide for the Bozeman area which the Forest Service published. When her younger children were in high school she returned to college and completed her degree, 34 years after she first entered Cornell. In Helena, in addition to official entertaining, she wrote magazine articles, mostly about outdoor subjects, and a weekly newspaper column about hiking and cross-country skiing. She worked for the Forest Service assessing trails and planning new trails. Jean and her husband retired to Corvallis in 1987. Jean was a Master Gardener in both Montana and Oregon, and was also a member of the handweavers guilds in both states. She was a strong supporter of the Greenbelt Land Trust and the Corvallis-Uzhgorod Sister Cities Association. She and her husband enjoyed camping, hiking and wilderness canoe trips. They visited 48 of the 50 states, traveled in more than 50 foreign countries and lived for a year in Malaysia. She was a creative and artistic person, traits which she passed on to her children. Jean was preceded in death by her parents and her three older sisters, Grace, Mae and Shirley. She is survived by Irving Dayton, her husband of 56 years; by her younger sister Elena “Dolly” Patera; by her five children, Barry Dayton and wife Barbara of Park Ridge, Ill.; Peter Dayton and wife Colleen Hunter of Missoula, Mont.; Melissa Dayton Boyd and husband Randy of Corvallis; Andrew Dayton of Renton, Wash.; and Beth Dayton and husband Jeff Jarvi of Salem; by seven grandchildren and five great-grandchildren. A memorial service will be at 2 p.m. Friday, April 17, at the DeMoss-Durdan Garden Chapel, 815 N.W. Buchanan Ave., Corvallis.

Jean Dayton of Corvallis died on March 30 from complications of strokes and Alzheimer’s disease. She was 84. Jean was born in Brooklyn, N.Y., on Dec. 30, 1924, the fourth of five daughters of Louis and Anna Klein. During high school she... View Obituary & Service Information

The family of Jean Dayton created this Life Tributes page to make it easy to share your memories.

Jean Dayton of Corvallis died on March 30 from complications...