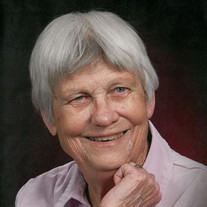 Jean Lipscomb Hall — wife, mother, grandmother, newswoman and tennis champ — died January 9 of complications from congestive heart failure at West Hills Assisted Living in Corvallis, with family by her side. She was 90 years old. Jean was born in Lockhart, Texas, to John William Lipscomb and Corinne Storey Lipscomb. Her parents christened her Beulah Jean, but you didn’t call her Beulah unless you wanted to make her mad. Growing up, her friends called her Lippy or Lucky. She grew up in Lockhart, Palacios and Austin, Texas, graduating from Austin High School. She attended Rollins College in Florida and the University of Texas at Austin, where she was president of Chi Omega and Theta Sigma Phi sororities. She graduated from UT in 1951 with a bachelor’s degree in journalism. Jean started her journalism career in Texas, working as a reporter and editor at the Refugio Timely Remarks and the Corpus Christi Caller-Times, then moved to Louisiana, where she worked as a correspondent for United Press International in New Orleans. Friends there set her up on a blind date with James William “Jay” Hall, a reporter for the Times-Picayune. They married in 1956, honeymooned in Havana and lived in New Orleans and then Baton Rouge, where Jean wrote for the Morning Advocate and Jay covered the statehouse for the Picayune. Next the couple moved to Memphis, Tennessee, where both held reporting jobs at the Commercial Appeal newspaper and the first of their three children was born. At that point, Jean quit work to raise kids and the family followed Jay’s newspaper career to Tucson, Arizona; Lakeland, Florida; back to Tucson; and, finally, back to the Memphis area. As her children grew older, Jean returned to work, first in public relations and then, inevitably, in the newspaper business. She served as managing editor of two weekly newspapers in West Tennessee, first the Germantown News and later the Millington Star. Jean was a natural athlete, and tennis was a lifelong passion. She played on her high school and college teams, worked as a tennis instructor at a summer camp in New Hampshire, competed in rec league and country club tournaments, and continued to play regularly into her mid-80s, making many lasting friendships along the way. She competed in the Tennessee Senior Games and in regional and national Senior Olympics tournaments in Missouri, Louisiana and Florida, bringing home plaques and medals for tennis and swimming. Jay died in 1995, and in 2005 Jean moved to Corvallis to be near family. She was a member of the First Presbyterian Church and the Timberhill Tennis Club. Besides spending time with family, she enjoyed going to the library, attending Corvallis Knights baseball games and going on outings with her church group. Life knocked Jean down more than once, but she always got back up swinging. She was too tough to stay down and too stubborn to quit. She was preceded in death by her husband; and her brothers, Jack and John Lipscomb. Survivors include two sons, Bennett Hall of Corvallis and Scott Hall of Rapid City, South Dakota; a daughter, Allison Dummett of Sydney, Australia; six grandchildren; and numerous nieces and nephews. A public memorial service will be held at 3 p.m. Wednesday, January 16, at the First Presbyterian Church in Corvallis.We are grateful for the gift of Jean and look forward to celebrating her life at First Presbyterian Church in Corvallis this Wednesday at 3pm. During her service, there will be a time of remembrance. I invite you to contribute to it by answering one or all of the questions below. All responses will be compiled for the family even if they are not shared in the service. Please reply to Pastor Sharon H. Edwards (541-753-2228 First Presbyterian Church) by 3pm this Tuesday, January 15th. 1. What did you appreciate or admire about Jean. 2. Tell a quintessential Jean story, one that reflects her personality or heart 3. What gift did you receive from her, or what legacy has she left you. If you plan to attend, please know that we have permission to park in the Baptist Church parking lot across Madison and Ninth Street. If you are unable to make it, here is the link for the live streaming. I encourage you to log in by 2:50 to enjoy the Gratitude Jazz Band. Jean Hall Memorial Live Stream Interment will be at Lockhart Municipal Burial Park in Lockhart, Texas, where a graveside service will be held at a later date. Local arrangements are by DeMoss Durdan Funeral Home. Condolences and remembrances can be left at www.demossdurdan.com. In lieu of flowers, the family suggests a memorial donation to the First Presbyterian Church.

The family of Jean Lipscomb Hall created this Life Tributes page to make it easy to share your memories.