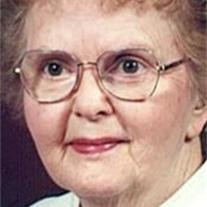 Jean was born July 16, 1925, the last of seven daughters of Ernest Jackson Langley and Amy Zoe Pratt Langley of Rock Lake, N.D. She attended Park College outside Kansas City, Mo., where she graduated in 1947 with a major in English and minor in education. While at Park during the war years, Jean had an active interest in civil rights, attending integration demonstrations and supporting the rights of the Japanese-American students at the college. At Park College, she met Clinton D. Morrison Jr. of Oklahoma City, and they were married on June 3, 1947, in the Park College chapel. Jean and Clint felt strongly that they were entering a career of church service together. Jean supported Clint through his seminary work and early pastorhood in Altamont, Ill. In the summer of 1949, with a 6-month-old child, they crossed the Atlantic on the Queen Mary and spent the next two years in Basel, Switzerland, where Clint worked on his doctorate in theology. In 1951, they returned to live at McCormick Theological Seminary in Chicago, where they had two more children. While raising three children, Jean did both teaching and administrative work in church education programs, community nursery schools, and interdenominational vacation Bible schools. In 1968, Jean and Clint moved to Louisville, Ky., where Clint served at Louisville Presbyterian Seminary. Jean began teaching in the Jefferson County school system, while also taking graduate classes in teaching of English and reading at the secondary level. She went on to specialize in teaching disadvantaged children in inner-city schools, including Russell and Shawnee Jr. high schools. Also during this time, Jean continued as a leader in local volunteer and church activities, becoming ordained in Stephen Ministries and serving as a national delegate in Presbyterian Women and as a church elder. She maintained her commitment to human and civil rights not only through teaching, but also by being a firm and outspoken advocate for fairness, equality and doing the right thing, in the home, at church and seminary, and in the community. Jean loved encouraging and helping other people to be successful. She was a modest and gracious hostess to many guests. She will be remembered for the twinkle in her eye and the quiet chuckle she offered to those around her. And for her ruthless play on the Scrabble board. Jean enjoyed family, stayed in contact with her sisters and family spread throughout the country, and was a loving mother and grandmother who was very proud of her children and grandchildren. After moving to Corvallis in 1998, where their oldest son and his family live, Jean and Clint attended First Presbyterian Church and lived at the Regent from 1998 through 2005, before moving to Timberhill Place. Jean held court at many family gatherings in Corvallis, always welcoming family home from far away with a warm smile and kind words. Jean was preceded in death by her husband, Clint, in 2010. She is survived by her children, Greg Morrison of Denver, Colo., Amy Morrison of Arcadia, Calif., and Clint Morrison III and daughter-in-law, Nancy Rosenberger, of Corvallis; as well as three grandchildren, Elise Morrison of Providence, R.I., Ted Morrison of Moscow, Idaho, and Laura Morrison of New York City. A memorial service will take place at 2 p.m. Wednesday, Dec. 21, at First Presbyterian Church.

Jean was born July 16, 1925, the last of seven daughters of Ernest Jackson Langley and Amy Zoe Pratt Langley of Rock Lake, N.D. She attended Park College outside Kansas City, Mo., where she graduated in 1947 with a major in English and... View Obituary & Service Information

The family of Jean Morrison created this Life Tributes page to make it easy to share your memories.