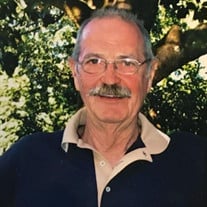 Jirl Edward Scott Jirl Edward Scott, 80, passed peacefully Friday morning, September 24, 2021, with family at his side. Born June 26, 1941, in Shady Valley, Tennessee to Edward and Geneva Scott, Jirl was the younger of two children. His family’s traditions, steeped in Appalachian culture, gave Jirl his core values and fond memories throughout his life. Jirl cared deeply for his family and friends and remained faithful to his lifelong belief in always being true to his word. In 1955, Jirl’s parents left their home in the rural mountains of Tennessee and settled in Corvallis, where he attended Corvallis High School. In the summer of 1962, he met Jean Popenoe while she was a student at OSU. They were married in 1966 and celebrated their 55th wedding anniversary this June. Known locally as “The House Doctor,” Jirl worked his way up from hod carrier to contractor, remodeling all his family’s homes along the way. He was the proud father & adoring grandfather of four sons and seven grandchildren. Seeing a need in the community, and in support of his sons who were active in the sport, Jirl opened Corvallis’ first skateboard shop, Allskate. Since 1996, Jirl and wife Jean have called their property on Greenberry Road home, earning him the honorary title of “Mayor of Greenberry.” Jirl is survived by his loving wife, Jean, their four sons and spouses, Jacob (Sarah), Job (Pernille), Jordan (Nila) and Josh (Lance), grandchildren Amelia, Ash, Tanah, Lo, Finnian, Lucy and Sequoia, and his sister, Barbara. Family and friends are invited to celebrate his life on Saturday, October 16, 2021, at 2:00 PM at the lake at Warden Farms on Smith Loop.

The family of Jirl Edward Scott created this Life Tributes page to make it easy to share your memories.