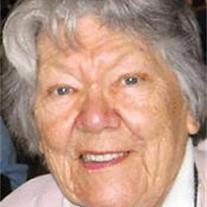 Joan Bailey, 86, passed away in her home Feb. 9, 2011, after her battle with cancer. Her family was with her. Joan was born on Sept. 14, 1924, in Liverpool, England. She was the second-oldest, with four siblings, Harold, Vera, Peggy and Frankie. She graduated at the age of 14, and during her teen years, survived the Blitz of World War II, living in and out of air-raid shelters. Joan met her future husband, Hugh, at a dance in 1945. They married and had two children, Carol and Robert. In 1959, they moved to the United States, arriving on Thanksgiving, in hopes of providing a better life for their family. Joan became a supervisor in an electronic engineering firm, and later worked for the U.S. Postal Service. She eventually worked as a real estate agent. When their son was paralyzed in Vietnam, Joan never returned to work. Joan loved spending time with her grandchildren, and also enjoyed gardening, canning and knitting. She was a phenomenal knitter, and won first-place and best-of-show ribbons for her knitting. Joan never sat idle. If her hands weren’t pulling weeds or knitting, they were helping the ones she loved. Over the years, Joan made many trips to England to spend time with relatives. In her last few years, Joan eventually moved to Corvallis to be close to family. Her main joy during the later years of her life was her great-grandson, Braedon; together they created memories that will be treasured forever. Joan was a very loving, kind and generous woman, and she devoted her life to her family. She was a shining light to everyone who met her, and will be missed terribly by all whose lives she touched. She is survived by her sister, Peggy Harwood; son and daughter, Robert and Carol Bailey; grandchildren Dean and Deian Moore; great-grandchildren Braedon Moore Price, and Colton and Chandler Moore; and several nieces and nephews in England. A memorial service for close friends and family to celebrate her life will take place at Carol’s home in Corvallis. For information, call 541-738- 0751.

Joan Bailey, 86, passed away in her home Feb. 9, 2011, after her battle with cancer. Her family was with her. Joan was born on Sept. 14, 1924, in Liverpool, England. She was the second-oldest, with four siblings, Harold, Vera, Peggy and... View Obituary & Service Information

The family of Joan Bailey created this Life Tributes page to make it easy to share your memories.