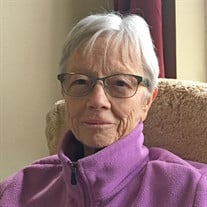 March 20, 1928 — December 4, 2017 Joanne Hopkins, 89, died at Regent Court Memory Care in Corvallis from a combination of medical conditions complicated by Alzheimer’s disease. Joanne was born to Walter Alfred “Buck” Swoffer and Henrietta L. Gerlicher in Walnut Grove, Minnesota. She was the youngest of eight children and grew up enjoying swimming, sailing, softball, canoeing, skating, fishing, hunting, and horsebacking riding. She especially loved the summers she spent as a girl at the family’s cottage on Lake Shetek. Joanne graduated from Walnut Grove High School in 1946 and the Northwestern Hospital School of Nursing in Minneapolis, Minnesota in 1951. In January 1954, she headed west to California with Jeanette, a nursing school friend. While working as an R.N. in Visalia, California, she met George G. Hopkins on a blind date and they were married on January 14, 1956 in Las Vegas. A mutual love of sports drew them together. Joanne continued to work until they started a family, then retired from nursing. Sharon was born in December 1956. Carrie “Coco” and Glenn soon followed. George’s career with the California Youth Authority took them from Visalia, to Paso Robles, Bakersfield, Campbell, and eventually to San Jose in 1965 where Joanne lived until 2013. While in San Jose, they became fans of the San Francisco 49ers and the San Francisco Giants. George retired in 1982 and they enjoyed nine years of retirement together until George died suddenly in 1991. In November 2013, Joanne moved to Corvallis to be with her daughters. During this time, she attended the Grace Center Adult Day Services while living with Carrie and Rick before moving to Regent Court in 2015. Joanne’s passions were many. As an adult, she enjoyed softball, bowling, golf (twice awarded most improved golfer and two holes in one), swimming, camping, traveling in the motorhome, garage sales, cooking, pets, yoga, crossword puzzles, and gardening. She had strong friendships with her neighbors in San Jose and her friends at the local YMCA in Saratoga. She also enjoyed attending family reunions. Joanne remained physically active into her mid 80’s. Joanne is survived by daughters, Sharon (Ted) Pawlak of Albany and Carrie (Rick) Rosteck of Corvallis; son Glenn Hopkins of Sacramento, California; three grandsons; one great-granddaughter; sister Patricia Lund of Roseville, Minnesota; and numerous nieces and nephews. If you would like to make a donation, please consider the Grace Center in Corvallis, Lumina Hospice, the Alzheimer’s Association, or the Alzheimer’s Foundation of America. .

The family of Joanne Hopkins created this Life Tributes page to make it easy to share your memories.