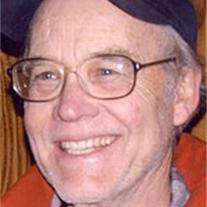 Joe Boynton Hinds died Wednesday, Sept. 9. Joe was born on May 4, 1941, in Lubbock, Texas. He enjoyed his childhood with his parents on his grandparents' farm in western Texas. The family then moved to eastern Washington, where Joe's father was a pastor of several congregations. The family eventually settled in the Portland area. Joe received a bachelor of science degree at Portland State University in 1965, and a master's in geology from Western Washington University in 1972. Joe worked as a geologist. Beginning in 1984, he taught geology at community colleges and through Elderhostel. Joe's dedication to natural resource education was exemplified by two decades of volunteer service as Alsea's representative on the Benton County Soil and Water Conservation District Board of Directors, where he was a driving force in the Education and Outreach Program. He combined a wealth of technical knowledge in geology and soils with local, on-the-ground experience to enhance the program's activities and demonstrations. Most recently, he collected local soil samples being used in outreach projects for high school students. As the agency said in an article about him in 2006, "Joe Rocks!" In addition to service with the BCSWD, he participated in several builds for Habitat for Humanity. He volunteered every weekend for six months to help complete Alsea's first Habitat home. In July, a Habitat volunteer from the East Coast with whom Joe had worked on four previous builds commented that Joe was her "quiet hero," because he so often, and in such an unassuming way, provided other, less skilled volunteers with quiet instruction so that they could be successful, yet he never expected any fanfare. Joe deeply loved his family, to whom he was a rock of strength. He was a faithful husband to his wife, Carolyn, and was completely dedicated to his three children: Jennifer, Mariah and Jorden. His family recognized that Joe's foundation and guidance came from his faith in Jesus Christ. Joe has two brothers, John and Sam. Sam said that Joe was the best brother and friend a person could have. Joe was known by family, friends and neighbors as a kind, quiet person with a strong spirit of generosity. He was interested in everything: geology, religious studies, history, politics, astronomy, social issues of poverty, justice and the environment - everything. He loved working with his hands, and was especially creative with natural materials such as wood and rock. Joe wished to have his ashes placed in Palouse Falls, Wash., a powerful waterfall with huge basalt columns in the open country that he loved so much. A celebration of Joe's life will be held at 2 p.m. Sunday at the home of Sam and Edie Hinds, 3221 N.W. Covey Run Road. Memorial donations can be made to Frontier Missions, 3302 N.W. Marine Drive, Troutdale 97060.

Joe Boynton Hinds died Wednesday, Sept. 9. Joe was born on May 4, 1941, in Lubbock, Texas. He enjoyed his childhood with his parents on his grandparents' farm in western Texas. The family then moved to eastern Washington, where Joe's father... View Obituary & Service Information

The family of Joe Hinds created this Life Tributes page to make it easy to share your memories.