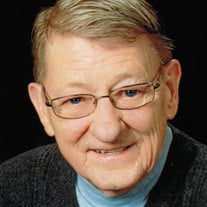 JOEL EUGENE BOND December 20, 1941 – March 21, 2019 Joel Eugene Bond, 77, passed away peacefully at home on Thursday, March 21, 2019. Joel was born in Fargo, North Dakota to Archie and Ruth Bond, the “5th of 8” children. As his dad was in the Air Force, the family lived in Michigan, Minnesota and North Dakota. Joel’s first two jobs were working in bowling alleys. This led to his interest in league bowling. At age 16, he bowled a perfect game of “300”. Joel joined the United States Army in 1962 and served until 1965 as a Specialist 4th Class in Zerndorf, Germany. He was a Communication Specialist in the 4th Armored Division, 22nd Field Artillery, in Fire Direction Control. While “on his leaves”, he visited and enjoyed other European countries. Thanks to a good old “Midwest Tornado” in Fargo, North Dakota in 1957, his family moved to Moorhead, Minnesota, and Joel met his “teenage sweetheart”, Audrey Yeager. They were married in Trinity Lutheran Church on April 22, 1966, in Papillion, Nebraska. They would have celebrated their “53rd” Wedding Anniversary this month. They were blessed with three wonderful children: Lisa, Ryan and Andrea and five grandchildren that he adored. They lived in Omaha, Nebraska until they moved to Salem, Oregon in 1975. Joel began his career in floor covering at Nico in Salem. He continued this career path at Benson’s Floor Covering in Corvallis from 1983 to 1989, at which time he opened and operated Corvallis Floor Covering until his retirement in October 2006. During his time in Salem, Corvallis and Philomath, Oregon, Joel enjoyed camping along the Oregon coast and Cascade Mountains with his family. He and his buddies, Rob, Randy, Geno, Kevin & Mikey had fun hunting, fishing and golfing. He was preceded in death by his parents and three brothers, Paul, Jay and Mark. Joel is survived by his wife, Audrey; son, Ryan Bond of Corvallis; daughters Lisa Russell (Kevin) of North Albany, and Andrea Galvin (Jeremy) of Beaverton; brothers Curt (Marion), Olathe, Kansas, and Gary (Karen), Meza, Arizona; sisters Barbara (Lewis), Caldwell, Idaho, and Susie Christianson (Jerry), Tulsa, Oklahoma; sister-in-laws Edele Bond, Fargo, North Dakota, and Vivian Stern, Reedley, California; brother-in-law, Les Yeager, Coos Bay, Oregon; five precious grandchildren, Aaron, Eric and Adam Russell & Ella & Pearl Galvin; Special daughter, Shilpa Sarwate, from India & many wonderful nieces and nephews throughout the United States. Joel was interned at Willamette National Cemetery on April 2, 2019. Memorial Service will be Saturday, April 13, 11:00 AM at Peace Lutheran Church, 2540 Applegate Street in Philomath, which is Joel’s home church.

The family of Joel Eugene Bond created this Life Tributes page to make it easy to share your memories.