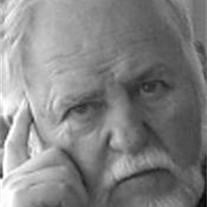 John was a Wisconsin boy who became an Oregonian upon arrival here in 1968. Lake Mills, Wis., was his boyhood home, and he made lifelong friends there. He went to Stevens Point College for two years, and then, out of love for languages, enlisted in the National Guard in order to study Russian at the Army Language School. Assigned to Polish, he came to love that language and culture. Returning to Wisconsin in 1961, John took up economics at the University of Wisconsin-Madison, and found that studying comparative systems made a good fit with his love of Polish. He spotted a young woman reading a book on the Russian Revolution, and, in 1963, married her. We observed our 48th anniversary on Nov. 4. In 1966 and 1967, we and our 2-year-old-son spent time in Poland, where John had a grant to study the Polish banking system. We enjoyed being educated by Polish friends about the true history and situation of the Polish nation. There was theater; there was Chopin - and the challenges of everyday life in a Communist country. We reveled in it, and we made lifelong friends. John had bought a little red Volkswagen, and in the ensuing summer, we camped all over the Balkan Peninsula. Back in Madison, with graduate support running out, John accepted a job at Oregon State University. Our first forest hike - the Pamelia Lake Trail - converted us to backpackers for life. Having a job now also made having a second child feasible. In 1971, we built a house that Cy Stadsvold, also a new faculty member, designed for us. We have lived in it and loved it all our lives. Having completed his doctorate in 1973, John took a one-year job at the University of Victoria, for the sake of curiosity and living in Victoria. In 1976, John sought another research stint in Poland, following which we camped all over southwestern Europe with our Polish Fiatczyk. In 1984, John accompanied me on a research trip to Moscow. It was the year Reagan called the Soviet Union "the Evil Empire." Our 14-year-old son got a political education attending Russian school that year, and reading Solzhenitsyn in the metro. In 1992 and 1993, we split a trip between my Fulbright in Kiev and his research in Warsaw, spending the holidays with our sons in Turkey. About this time, OSU's graduate economics program was going strong, and John enjoyed teaching the grad students from Eastern Europe and China. Comparative systems had become a richer field of inquiry, and some of these students have made important contributions in their native lands. In 1997, John accepted a contract through the State Department to assist the Republic of Georgia in its economic transition. By this time, he was fairly fluent in Russian - very good at proposing toasts. When the job ended, he taught a seminar at the University of Tbilisi on the economic transition. Later, other trips of this kind took him to Poland and Far Eastern Russia. Most of these years, John was a runner and bicyclist, and for 30-plus years took part in Bill Winkler's exercise class at the university. Together or as a family, we canoed, and tried mountain climbing and ocean kayaking. For the last 10 years of his life, John's activity was limited by congestive heart failure. We enjoyed theater trips to Ashland in those years, and visits with family. John was a peacemaker all his life, and in 2003, the university called him out of retirement to become acting chair of the economics department for a year. A peacemaker in family life, John was a wonderful marriage partner and father. He was always supportive of his wife's endeavors: Once his dissertation was finished, he took over a greater domestic role, and urged me to get serious about my thesis. He bathed kids and baked bread - seriously. He later put up with 15 years of commuter marriage. John and I enjoyed art wherever we went. We bought art first in Eastern Europe, where we could afford something. We collected Polish posters for pennies. In Victoria, we came to love the indigenous art of the Pacific Northwest. Our Bear Mother totem by Dwayne Simeon is the protectress of our clan (headed by the Big Bear himself). She will commemorate John at OSU by taking her place in the Native American Longhouse. John Farrell is survived by his wife, Dianne; sons Michael and Christopher; by his sister, Mary Dempsey of Jerome, Ariz.; and brother, Patrick of Guam. A memorial gathering will take place at 1:30 p.m. Monday, Nov. 21, at DeMoss-Durdan Garden Chapel in Corvallis. Flowers are welcome, as we love their beauty and symbolism. Anyone wishing to do so can contribute in John's memory to the Corvallis Homeless Shelter Coalition.

John was a Wisconsin boy who became an Oregonian upon arrival here in 1968. Lake Mills, Wis., was his boyhood home, and he made lifelong friends there. He went to Stevens Point College for two years, and then, out of love for languages,... View Obituary & Service Information

The family of John Farrell created this Life Tributes page to make it easy to share your memories.

John was a Wisconsin boy who became an Oregonian upon arrival...