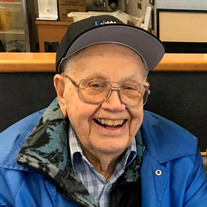 John Gunnard Holmes was born July 6 and 7, 1921 at the Alhambra “Horsebital.” He had two birthdays because his mom and the birth certificate disagreed, which he expected both to be celebrated each year. During his life he valued family, church and job. He grew up in a strong family and church. There he met and courted the love of his life, Anna Marie Nelson, a daughter of the minister. He described himself as a daredevil, but Anna had to trick him into holding hands for the first time. Graduated Mark Keppel High School, and attended Pasadena Junior College. During WW2 he enlisted in the Navy as a pilot, following his two older brothers, also pilots. When he completed training, he married his high school sweetheart, a marriage which lasted 76 years They had planned a wedding at home, but Anna was told by friends that he could be ordered out of reach, so she took the train to Texas where he was ending his training. John was given orders to remain in Corpus Christi, Texas, when mom married and joined him in 1944. He flew PBY flying boats and had the most dangerous job of being a flight instructor. During this time his first son, John Kenray, was born, given a middle name that honored his two older brothers who flew more than 100 combat missions between them. After the war he worked briefly for the railroad, but soon began a lifelong career in the California Department of Motor Vehicles. He started as an assistant in a two man roving office and ended up many years and a six moves later on the Director’s cabinet as Chief of Compliance. He was broadly recognized for his supervisorial and problem solving skills. During this time he was a devoted father and church member. He and Anna Marie raised three children keeping the family together and happy through the moves all over the state. When the kids were old enough he took them camping in the summer (from Burney Falls to Death Valley and all points in between) and fishing, water skiing and kept them involved in church and family. When he retired, he and Anna bought a travel trailer and lived on the road for most of the year, summers in Oregon, winters in Arizona, and took extensive trips with a church group of retired friends. ;He often parked his trailer in his son Lawrence Holmes’ back yard on the transition from north to south. John became known to his great grandchildren as “Grandpa Coconut Head,” a name he gave to them which illustrates his sense of humor so many remember him by. After about a decade he settled in Corvallas Oregon near daughter Jeanne Holmes/Swanson and her family. He loved his family dearly, their victories in life brought him great happiness, their trials and concerns troubled him. When independent living became difficult, John and Anna Marie moved to The Regent, a senior living facility, where dad flourished fixing everyone’s computers, phones, and televisions. It was an extension of the skills in people handling and problem solving. He was an Ambassador for new arrivals and commissioner of Bean Bag Baseball, Jigsaw puzzles, resident convenient store and keeper of the birds. In the last nine months he and Anna moved to Timberhill Assisted Living, where they received the best of loving care. His last charitable act was to distribute his stimulus check to a table of charities. He was a gentle, kind and loving husband, full of life and good humor, father, grand father, great grandfather and great great grandfather. He left a path of people that loved and appreciated his caring and supporting ways. HIs children, grandchildren and great grandchildren will dance his memories with joy in their hearts, and live by the lessons he gave.

John Gunnard Holmes was born July 6 and 7, 1921 at the Alhambra &#8220;Horsebital.&#8221; He had two birthdays because his mom and the birth certificate disagreed, which he expected both to be celebrated each year. During his life he valued... View Obituary & Service Information

The family of John G. Holmes created this Life Tributes page to make it easy to share your memories.