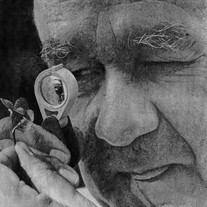 John (“Jack”) Daniel Lattin was born July 27, 1927 in Chicago, Illinois, to Percy Daniel and Myrtle Race Lattin. He served in the U.S. Army 1945-1947, and later graduated from Iowa State University (B.S.), University of Kansas (M.S.), and the University of California Berkeley (Ph. D.) He married his wife of 63 years JoAnne Gilmore in 1953 in Salem, Oregon. They lived in Berkeley until 1955, then moved to Corvallis where he joined the faculty of entomology at Oregon State University. During his 40-year career at OSU, he was Curator of the Entomology Museum (1961-66), directed the Science Honors Program (1963-65), and established the University Honors Program (1966). He was later Assistant Dean of the College of Science (1967-73), Director of the Systematic Entomology Laboratory (1974-96), Acting Chair of the Department of Entomology (1976-78), and Director of the Biology Degree Program (1976-78). He was also Associate Dean of the College of Science (1982-87), and Rice Professor of Systematic Entomology (1996). In 1964-65, he held a National Science Foundation faculty fellowship at the Agricultural University of the Netherlands, and later received a Fulbright Senior Research Fellowship to that institution (1973-74). In 1987, he was a visiting scientist at Oxford University in England. For his entire career, he taught entomology, enjoying and deeply caring for his many graduate students, and published more than 150 papers - quite a feat for a two-fingered typist. Special interests included insect taxonomy, impacts of introduced insects on natural ecosystems and agriculture, the use of insects as indicators of ecological health and stability, and the role of forest insects. For 20 years he was associated with and took great pride in working with colleagues across many disciplines at the Long-Term Ecological Research Site in western Oregon. He retired in 1996. Through his ever present hand lens, he passionately sought to understand the insects under our very feet, a mysterious and wondrous world representing the vastness of time and space. He took great delight in sharing with school children the strange and beautiful creatures housed in the OSU Entomology Museum. Many kids went away with the tools of his trade – a net and a collecting bottle to explore the fields, forests and back yards of their own neighborhoods. With their own hands he and JoAnne built a marvelous cabin in the woods, “The House that Jack Built”, to give his three sons and their friends room to roam and explore. He taught them to appreciate a sharp saw, a good hammer, a well-laid fire, and a well-presented fly on the stream below the cabin. The knowledge that the cabin in the woods is being carried on by a new generation gave him immense pleasure. In his long, full, and rich life, he displayed great curiosity and wonder, and encouraged his family, students, and friends with good humor, appreciation, and deep affection. He will be greatly missed. Jack is survived by his wife JoAnne and three sons and their families: Peter (Donna), David (Kendra), Gregory (Dina); and his much beloved grandchildren: Shannon (Adam), Chloe, Will, Jack, and Jamie. As he requested, there will be no service. Donations in his memory may be given to the OSU Foundation for the Oregon State University Valley Library and Benton Hospice Service. Please leave your thoughts and memories at http://www.demossdurdan.com.

The family of John "Jack" Lattin created this Life Tributes page to make it easy to share your memories.