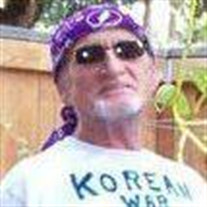 For nearly 79 years, John Bruce Robinson explored the world with gratitude and wonder, mixed with an intense love of his greatest treasures: nine children and 12 grandchildren. Nature his god and never much for material things, he was loved. Our dad/grandfather passes rich in all he valued most. John packed 103 years into 78: a Navy man in the Korean War; graduating from DeVilbiss High before earning his bachelor’s, Master of Educational Administration and post-graduate degree in Educational Media from the University of Toledo. Born a lifelong traveler in Toledo, Ohio, on Dec. 5, 1936, John danced at his high school reunion in August and screamed for beads at Mardi Gras just last year. After separating from marriage in 1980, Dad recounted how his mid-career change working for Cetylite allowed him to "go up and down the West Coast and have girlfriends from Alaska to Hawaii." Days before passing, Dad reflected with warm sentiment, "But, those days are over and I'm never moving from Corvallis. This is home and where I'm going to die. This is my heaven." True to his word, John passed on Oct. 12, 2015, how he'd have hoped. Fiercely independent with sharp mind, a quick wit and actively biking and lifting weights; at home with his cat — without warning and of natural causes. John leaves behind an adoring throng: sons Tim (Anna), Ryan and Daniel (Elise) Robinson, Gabriel Wallace and Christopher Monroe; daughters Kerry and Rayni Robinson, Laura Rawson (Mike), Rachel Robinson — Brandon (Eric); grandchildren Mallory McCormick, Becca Wright, Layni Rober and Naveah Wallace, Mathew and Aiden Rawson, Michael and Nicholas Robinson, Kaleb and Kameron Johnson, Kayden Brandon and Nicholas Wallace; and life-long friend Sandy Neidlinger Monroe. John's ashes will be placed at Willamette National Cemetery in Portland. In lieu of flowers, we ask you direct any remembrance to the Corvallis Humane Society in his honor. A celebration of John Robinson's life will be at 7:30 p.m. Friday, Oct. 23, at Murphy's Restaurant, 2740 S.W. Third St., Corvallis.

For nearly 79 years, John Bruce Robinson explored the world with gratitude and wonder, mixed with an intense love of his greatest treasures: nine children and 12 grandchildren. Nature his god and never much for material things, he was loved.... View Obituary & Service Information

The family of John Bruce Robinson created this Life Tributes page to make it easy to share your memories.

For nearly 79 years, John Bruce Robinson explored the world with...