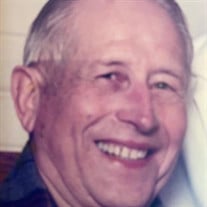 John Terhaar 12/24/1922 - 2/8/2021 Two things showed up for Christmas at the Terhaar house in 1922 — an Edison crank phonograph with quarter-inch thick records for the family, and a Christmas Eve baby boy. John was born in the house his grandfather built on a farm in Cottonwood, Idaho, to Anton and Mary Terhaar. A happy day. Fast forward a couple years. Farming was never an easy job. Throw in some bad weather at the wrong time, and a bank loan counting on a crop about to be harvested. In this case, that bad weather came in the form of a devastating hailstorm with hailstones the size of chicken eggs,13 broken windows in the house, the family’s Buick touring car destroyed, and a farm crop one week from harvest completely destroyed. This was the last straw that caused the family to auction the farm and most everything else to pay off the creditors. Then they moved to Oregon to start over. John was a small boy. The family settled in Mt. Angel, Oregon, where John grew up and went to school. In February of ’43, with high school complete and WWII in full swing, John joined and served in the Army Air Force. His WWII service was spent working his way through the Pacific from the Panama Canal through New Guinea, Southern Philippines, and the Japanese Ryukyu Islands including Okinawa, which is where he was when the atomic bombs were dropped and the war ended. After the war he married Agnes Duman in Portland in 1947. In ’53 they moved to Corvallis where they lived the rest of their lives. They were together for nearly 70 years until her passing in 2017. John and Aggie had four sons. John always worked to support his family, not necessarily at jobs he would have chosen, but at opportunities that presented themselves and as his duty to his family. His work life was diverse. Initially he worked as a heavy equipment operator, a job which often involved traveling to job sites in the northwest. In order not to be away from his growing family, he traded his house for a laundry with living quarters above it next to Oregon State College. His laundry business profits enabled him to buy property and build a house on Oak Creek Road for his family, much as his grandfather had done in Idaho. The next job was as a mechanic for the Oregon State University motor pool where he worked until his retirement. He supplemented his retirement with a side business selling farrier tools and supplies to students learning that trade at Oregon State University. He was a cowboy at heart, enjoying caring for and riding his horse. His favorite vacations were trips to Idaho to help cattle rancher relatives with annual cattle roundups on horseback. The things that were important to him were: family, his Catholic faith, that his word was his bond and could be counted on, and that being truthful was important. Always a private man who made his own way and never wanted to put anyone out, he will be quietly laid to rest next to his wife, Aggie, and second son, Bob, in Saint Mary’s Catholic Cemetery, Corvallis. No services necessary in this COVID19 era for a man who lived a good life and outlived most of his friends. In his honor do something kind. He is survived by three sons and their wives: Ron and Nancy Terhaar, Albany; Gregg and Jan Terhaar, and grandson Kelly Crowther, Sisters; Jim Terhaar and Kelly Esterbrook, Bend. John died with family at his side. The family wishes to thank the people of Lumina Hospice for their help in the final two months of his life. . Arrangements by DeMoss-Durdan Funeral Home

John Terhaar 12/24/1922 - 2/8/2021 Two things showed up for Christmas at the Terhaar house in 1922 &#8212; an Edison crank phonograph with quarter-inch thick records for the family, and a Christmas Eve baby boy. John was born in the house... View Obituary & Service Information

The family of John Cletus Terhaar created this Life Tributes page to make it easy to share your memories.

Two things showed up for...