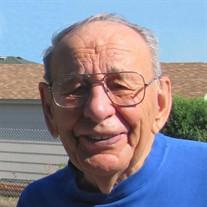 June 4, 1922 — Dec. 10, 2014 John C. Warnke, 92, passed away Wednesday, Dec. 10, 2014, in Corvallis. He was born June 4, 1922, in Custer, South Dakota. Following his service in the U.S. Army Air Corps during World War II, John earned a Bachelor of Science degree from the University of Montana School of Forestry in Missoula. He met Grace while both were in college, and they married in 1947. They moved to Oregon, where John worked as a forester until they returned to Montana late in his career. John was an exceptionally kind, caring, thoughtful person who was a devoted husband, father, grandfather and uncle. He had a passion for the outdoors, and was happy to share his knowledge and experience with anyone who showed an interest. John especially loved to teach his family the joys of camping, fishing and hunting. John was preceded in death by his wife, Grace; and his siblings. He is survived by his children and their spouses, Margaret Warnke-Shields (Don), John Warnke (Eneke), Nancy Napolilli (Tom) and Ann Thompson (Rory); and his grandchildren, Elizabeth Banks (Rick), Carolyn Rothwell (Dan), Nicholas Hansen (Kathryn), Greg Thompson (Lindsay), Jonathan Hansen and Leah Westwood (Benson). He also is survived by his four great-grandchildren, Cole Thompson, Everly Rothwell, John Hansen and Alexander Westwood; and his many nieces and nephews. A private family memorial will take place at a later date. Memorial contributions are welcome at http://www.bentonhospice.org/donate.

The family of John C Warnke created this Life Tributes page to make it easy to share your memories.