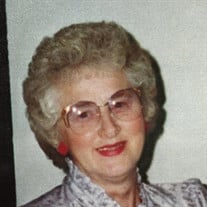 PHOTO Juanita Mae Hering May 23,1927 – Dec. 23, 2021 Juanita Mae (Wilson) Hering, age 94, passed away quietly on Thursday, December 23rd surrounded by family. Born in May of 1927 to Silas Clyde and Caroline (Ritter) Wilson, she was the youngest daughter of nine children. Juanita grew up in rural Polk County graduating from Pedee High School and later attending Willamette University. After the passing of her mother in 1938, Juanita became responsible for learning to care for the household including cooking for her father and the two brothers still living at home. She had already spent time learning to ride horses in from the logging sites, helping her father on the farm with milking, shocking and hauling hay, sewing sacks on the combine, helping on the baler and driving teams for the harrows, cultivators and clearing the land of brush and trees with horses. During World War II, Juanita found additional work at a sawmill running the cut off saw and working on the green chain. She married Albin Thomas (Tom) Hering in 1945. Together they raised three boys, buying their home in North Corvallis in 1956. After marriage, Juanita was a devoted wife, mother and homemaker. She worked outside the home for the State of Oregon and enjoyed volunteer work in 4-H, Scouting and other activities that involved her sons. She had many interests over the years from gardening and raising livestock, to reading and bowling. She enjoyed fishing, hunting and accompanying her husband, her sons and her granddaughters to elk camp for many years. Juanita was also actively involved with the Daughters of American Colonists. She was especially dedicated to collecting Valentines from local elementary schools along with other items to send to veteran homes each Valentine’s day, to help ensure that the veterans would know that they had not been forgotten. Juanita is survived by her brother, Robert Wilson, her three sons, A. James, Thomas C. and Steven L. Hering, and their spouses. Seven grandchildren, sixteen great grandchildren and four great-great grandchildren. She was known for her sense of humor, love of family and her kind and giving heart. Service will be held at Demoss Durdan Funeral Home in Corvallis on 1:00 pm, Thursday, January 6th. In lieu of flowers, donations may be made to the American Heart Association, Oregon Chapter (1-800-242-8721) or Disabled American Veterans (https://secure.dav.org/site/Donation)

The family of Juanita Mae Hering created this Life Tributes page to make it easy to share your memories.