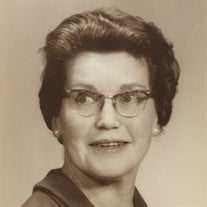 Julia Eloise Gray October 22, 1910 – November 16, 2015 Julia Eloise Gray passed away on November 16, 2015 at the remarkable age of 105. She was the daughter of Victor Wallace and Julia Etta Haselton and was born at their home in Swans Trail, a Norwegian farming community in Washington State. Julia was called Dooley by her friends and grew up living along the Snohomish River with her two brothers Ivor and Owen, her best friend Ruby and many other relatives from her mother’s family. She often reminisced of her childhood and delighted her grandchildren with her memories of growing up on the farm in the days of Indians, gypsies and prohibition. These memories were among the fondest of her life. After high school, Julia began training to be a teacher but then switched to nursing and graduated from Everett General Hospital as an RN. She met her husband to be Alden Kimball Gray while working at a hospital in Seattle. They were married in 1935 and moved to Corvallis in 1946. In Corvallis, Julia worked for the OSU infirmary as a night nurse for more than 20 years retiring in 1973. Her husband Alden passed away a few years later in 1977 but Julia continued to keep in touch with his extended family--the Rombouts in Belgium and the Grays in England and Washington and everywhere else. Julia was curious about life, served her community and took pleasure in helping others without prejudice. She worked with the Girl Scouts, she was a president of the Antique Button Club and an active member of her church, Grace Lutheran, for over 50 years. In 1978, Julia began a lifelong relationship with two young students from Iran, Mina and Ali. She served as a conversant with foreign language students and became close friends with many of them and even visited some in their home countries. Julia traveled to places as far away as Japan, India, Egypt, Thailand, Guatemala, Scotland, Ireland and to many countries in Europe. Her trip to Guatemala to visit her nephew Jeff led to a heartfelt friendship with Ethel Taylor of England. These two ladies corresponded through letters and crossed the Atlantic many times over a period of 30 years to see each other in their own countries and even met up in Egypt. Always eager to learn new things, Julia studied Spanish and became an accomplished calligrapher with her drawings often on display. She had an artistic flare with many things and especially the way she decorated her home and displayed her collections of eggs and antique buttons and other creative arrangements. She liked to keep up with the times and studied popular books on etiquette to ensure she was current on how best to show others respect and appreciation. Julia truly was a beautiful spirit who always looked for the best in others. Her outlook on life was positive. She believed that everyone was doing their best and that the “normal condition of man is to be joyful.” She is loved and survived by all of her children—Priscilla, Rebecca and Alden (Jay), her 11 grandchildren and her 16 great grandchildren. A celebration of Julia’s life will be announced at a future date. . Please share your thoughts and memories for the family at www.demossdurdan.com.

The family of Julia Gray created this Life Tributes page to make it easy to share your memories.