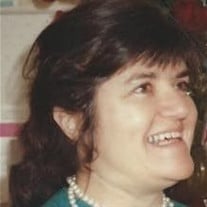 Julie W. Mittmann Nov. 23, 1940-June 24, 2014 Julie Waltraud Mittmann, age 73, died peacefully on June 24, 2014. Her loving husband of 50+ years was by her side. Julie was born on November 23, 1940 in Wuppertal, Germany to parents Louise (Brenner) and Peter Knebel. Julie spent her early childhood with her mother and siblings in the company of dozens of cousins, in a large extended family. In 1952 she moved with her mother, brother, and sister to Milwaukee, Wisconsin. Two years after her 1959 high school graduation Julie spent a year in Germany reconnecting with her cousins and working in her aunt and uncle's store in Mötzingen, Germany. When she returned to Milwaukee she got a job at Kroger's Grocery Store where she met her future husband. On September 7, 1963, Julie married Peter Michael Mittmann. They spent the early years of their marriage raising their rapidly growing family in Wind Lake, Wisconsin. In 1972 the family moved to Palo Alto, California and in 1983 to Corvallis, Oregon. In 2001 Peter and Julie completed their family by adopting two children. Julie spent much of her time volunteering in her children’s schools, coaching their teams, and supporting their other activities. In the late 1970s she had a more-than-full-time unpaid job coordinating and training over 200 weekly volunteers in a developmental therapy program for her son Andy. Later, she worked as the full-time caregiver for her mother who was afflicted with Alzheimer’s. Julie’s life work included raising not only her and Peter’s nine children, but caring for more than 70 children by being a foster parent for the Benton County, Oregon, Children’s Services. Julie is preceded in death by her son Andy Mittmann. Julie is survived by her husband Peter Mittmann and their children Jessica (Ed) Rothberg and Michael (Susan) Mittmann, both of Palo Alto, California; David (Lorrie) Mittmann of Port Angeles, Washington; Marie (Patrick) Guerrero of Turlock, California; Kathleen Mittmann (Don Karschnik) of Austin Texas; Matthew Mittmann of Portland, Oregon; Mary Mittmann and Emily Mittmann, both of Corvallis, Oregon. She is also survived by her sister Erika (Siegfried) Treu of Murrysville, Pennsylvania and her brother Peter (Joann) Knebel of Coral Gables, Florida, as well as by eight nieces and nephews and ten grandchildren. A memorial service will be held at Calvin Presbyterian Church, 1736 NW Dixon St, Corvallis, OR on Saturday, June 28 at 2 p.m. In lieu of flowers, memorial contributions may be made to Cornerstone Associates, attn: Nancy Maxwell, P.O. Box 973, Corvallis, OR 97339.

The family of Julie W. Mittmann created this Life Tributes page to make it easy to share your memories.