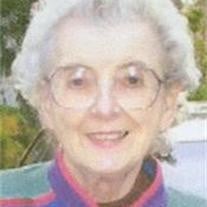 June Alta Rettig, beloved wife of Jack Rettig, died of heart problems at Good Samaritan Regional Medical Center on Saturday night, March 31. She was 91. She and Jack had been married for 67 years. In addition to her husband, June leaves behind her son Richard and his wife Fumico Nakagawa Rettig of Tokyo, Japan, and nieces Anita Lemmon of Erie, Penn., Pollyanne Hombeck of Holliwood, Calif., and Carolyn Yarnell of Huntington Beach, Calif. June was born to Alton J. and Ida M. (Garlick) Hugger on June 28, 1921. She was raised on the family farm near Erie, Penn., and as a youngster attended a one-room school. She graduated from Erie’s Academy High School in 1939. Life on the farm instilled in her a love of nature and a gift for gardening that lasted throughout her life. After high school June attended Erie Commercial College and upon graduation took an office job with a manufacturing company. With the coming of World War II she volunteered for service in the U.S. Navy WAVES. After basic training at Hunter College and advanced study at the University of Oklahoma, she was assigned to duty at the Bureau of Naval Personnel in Washington, D.C. At a Washington skating rink she met Jack Rettig, a sailor who was attending a Navy school. Their romance blossomed during weekend visits to Washington’s attractions and many walks through Arlington Cemetery. At the end of his training Jack was assigned to the USS Alabama in the Pacific Fleet. He returned at the end of the war and he and June were married in their Navy uniforms on December 1, 1945, in Raleigh, N.C. Upon their release from the service, the couple moved to Jack’s home in Evansville, Ind., where both entered Evansville College on the G.I. Bill. Their son Richard was born along before June was able to finish her degree. She later lost two sons in infancy, by far the most devastating events of her life. Jack graduated from Evansville College and in 1950 volunteered for one year of commissioned Naval Reserve duty during the Korean War. June worked in Evansville and cared for Richard while he was overseas. After his year of service on a destroyer Jack was released from duty in San Diego. June joined him there where they remained for the next seven years. In San Diego June and Jack both worked and attended school at night. June earned her associate degree at San Diego Junior College and Jack took a master’s at San Diego State University. Those were exciting times in a wonderful city. But after much encouragement from professors and friends, Jack decided to leave the aerospace industry, get a doctorate, and go into higher education. June cheerfully supported the decision while recognizing that she would have to carry much of the burden. They moved to Los Angeles, where Jack enrolled in the doctoral program at UCLA’s College of Business and June worked hard to put food on the table, raise her son, and help her husband through his schooling. Their joint efforts were successful, and in the fall of 1961 they moved to Corvallis where Jack joined the business school faculty at Oregon State University. June loved Corvallis and university life. She became active in OSU Folk Club activities and especially enjoyed the gourmet dinner group where she joined with other faculty women and wives in the preparation and enjoyment of outstanding menus from around the world. She worked at the OSU Press and the Office of Communications for seventeen years, enjoying her work as secretary to the Director of the Press. In 1969, June accompanied her husband on a memorable Fulbright year at the University of Ghana. There she had her only experience at managing servants. A good look at life in Africa contributed greatly to her appreciation of life in America. She retired in 1981 and spent many hours in subsequent years as a volunteer at the OSU Thrift Shop. She took up weaving and became a member of the Corvallis Weavers’ Guild. Retirement also provided time for travel, and after Jack retired in 1986 they were able to see much of the world. They enjoyed multiple trips to Europe and Asia plus junkets to Australia, New Zealand and Mexico and numerous bus and auto trips around the U.S., Canada and Alaska. Slowed by mobility problems during her final years, June developed an interest in genealogy and spent countless hours reading and working at her computer researching family history. June was a very sweet person, generous, helpful and considerate of others, always willing to do her share and more. She felt that she had lived a good life and was grateful for her blessings. She will be deeply missed by all who knew and loved her. A memorial service will be held at 1 p.m. Wednesday, April 11, at DeMoss-Durdan Funeral Home.

June Alta Rettig, beloved wife of Jack Rettig, died of heart problems at Good Samaritan Regional Medical Center on Saturday night, March 31. She was 91. She and Jack had been married for 67 years. In addition to her husband, June leaves... View Obituary & Service Information

The family of June Rettig created this Life Tributes page to make it easy to share your memories.