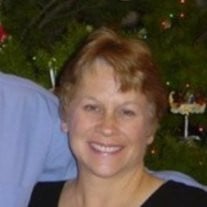 Kathryn Jean Weldon August 27, 1951 - August 02, 2013 Kathy Weldon died Friday, August 2nd in a motor vehicle accident. She was 61 years old. Kathy was born in Omaha, Nebraska to Donald and Winifred Toman. Kathy moved to Oregon in 1968 and was a graduate of Beaverton High School, class of '69. She then moved to Corvallis to attend Oregon State University. During her youth, Kathy was an active swimmer winning several awards and played the accordion. She married Jim Weldon in 1973 and they settled down in Corvallis to start a family. Kathy stayed at home with her two young children and enjoyed many crafts, sewing, and calligraphy. She and Jim also enjoyed gardening and grew a plentiful amount of fresh fruits and vegetables for the family. Within her many social groups, she often took on a leadership role. Kathy graduated from LBCC nursing program in 1987 and began working at Good Samaritan Regional Medical Center the same year. She was active in the hospital's Professional Nursing Care Committee serving as chair for over 10 years. She was very committed to her profession and supported the Oregon Nurses Association. Kathy enjoyed traveling and over the years had many opportunities to travel in the states and overseas with Heart of the Valley Choirs as the unofficial nurse. She also enjoyed regular travel with her mother as well as taking the motorhome out with Jim and friends. Family was an important part of Kathy's life, particularly her grand-children. She made every effort to spend as much time with them as she could. Kathy is preceded in death by her younger sister Linda Rae Toman and her father Donald Toman. Survivors include her husband Jim Weldon of Philomath; son Brian Weldon and spouse Laura Weldon of Las Vegas; daughter Stacey Morrison and spouse Roger Morrison of Portland; her three grand-daughters Julia and Megan Weldon, and Hannah Morrison; mother Winifred Toman of Salt Lake City; and younger siblings Richard Toman and spouse Suzanne Toman of Portland, and sister Diane McAuley and spouse Frank McAuley of Salem and her two nephews Tyler and Travis Beyer. Memorial Services to be held at The United Methodist Church in Corvallis at 10am, Saturday August 17th. Reception to immediately follow in the Community Center. In lieu of flowers, a donation fund has been established at Wells Fargo Bank to help with expenses for Julia. If you would like to make a donation you can go to any Wells Fargo Branch and request to make a deposit to the "Julia Weldon Donation Fund." DeMoss-Durdan Funeral Home is in charge of arrangements.

The family of Kathryn Jean Weldon created this Life Tributes page to make it easy to share your memories.