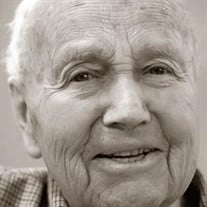 Dec. 2, 1920 – Jan. 13, 2015 Longtime Corvallis resident Keith L Sherry, 94, died on Jan. 13, 2015, after a lengthy battle with dementia. His life ended peacefully, with family by his side. He was born on Dec. 2, 1920, in Mackay, Idaho, to Floyd Daniel Sherry and Edith Bailey Sherry. His father was a miner, prospector and mineral consultant, so the family frequently moved around within the mining area of Central Idaho. Keith graduated from Mackay High School, then with a school friend went to Chicago to attend Coyne Electrical Trade School. After graduating from Coyne in 1940, he returned to Mackay and worked for a time as an electrician before joining the Idaho National Guard. He was subsequently inducted into the U.S. Army in April 1941, at the beginning of the U.S. involvement in World War II. In 1943 he was deployed to the Aleutian Islands. Later he became a part of the ski troops of the distinguished 10th Mountain Division, trained in the high mountains of Colorado. He then served in Italy from January 1945 until the end of the war, when he was honorably discharged. After the war, he studied electrical engineering at the University of Idaho. He worked for engineering consulting companies in Spokane and Seattle, Washington. Besides his work, he always enjoyed the outdoors; and in the summer of 1956 he joined the Seattle Mountaineers’ summer outing in the Sierra Minarets, a part of Yosemite National Park. On that trip, Keith met his future wife, Doris, whom he married four months later in Seattle. In 1959, Keith’s work took the family, now including two young daughters (Annette and Deanne), to Sitka, Alaska, where they enjoyed living for four years. Son Nelson was born in 1961, and the family was completed by the birth of daughter Marcia in 1964. In 1968, Keith and Doris settled their family in Doris’ hometown of Corvallis. Keith always enjoyed building things, so he designed and built the family homes in both Sitka and Corvallis. During construction of his Corvallis home, a large structural beam fell on him, breaking his pelvis and leg, and resulted in a severe concussion and long-term recovery. After his accident, he bought a large crawler tractor with which he ran his own business until he retired. One of Keith’s greatest pleasures in life was interacting with and enriching the lives of children. He was president of the Benton Literacy Council for a time. He worked with Boy Scouts and helped teach children to read through the local SMART program. He instilled in his own children a love of nature through activities such as family backpacking and camping trips. Keith always had a positive outlook, readily smiling and frequently expressing gratitude for his life and loved ones. Even as his dementia progressed, his cheery personality and humor continued to shine through. Until the end, his sunny disposition was appreciated by his many caregivers. His family is deeply appreciative of the compassionate end-of-life care given by the staff at Regent Court. Keith is survived by Doris, his wife of 57 years; his sister Avis Pearson; his four children, Annette Sherry, Deanne Mapes, Nelson Sherry (Lise Sherry) and Marcia Sherry-Newby (Philip Newby); six grandchildren; and numerous nieces and nephews. A memorial service will take place at 3 p.m. Sunday, Feb. 8, at First Congregational United Church of Christ. Memorial contributions can be made to the Nature Conservancy or the Alzheimer’s Association.

The family of Keith L. Sherry created this Life Tributes page to make it easy to share your memories.