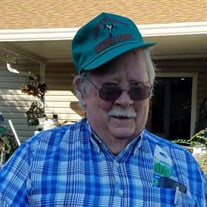 Kenneth Ray Blair was born March 26, 1938 in Wagoner, Oklahoma to Della ‘Mae’ Johnston Blair and Lonnie Earl Blair. He died of cancer on April 18, 2021 at the age of 83 in Albany, Oregon – his home for the past 30 years. Kenneth was the youngest son, and the last surviving of nine children. He grew up on a dairy farm between Okay and Wagoner (Oklahoma), where he learned the dairy business, along with farming and gardening alongside his award-winning father and siblings. He graduated from Okay High School in 1957 with honors. He graduated from Connors State College (Muskogee, Oklahoma) with an Associate in Science degree before transferring and earning a Bachelor of Science in Agronomy from Oklahoma State University (Stillwater, Oklahoma) in 1961. Ken’s first job after college was in Hiawatha, Kansas with the Hiawatha County Extension Service. In 1965 he began work at Farmers Home Administration in Guthrie Center, Iowa. On June 5, 1976, the Teton Dam broke in Idaho, and he received a call that afternoon requesting his help. He traveled to Idaho the next day at the request of the Bureau of Reclamation. His expertise as an appraiser was greatly needed to assess the damage, and to begin the reconstruction of the surrounding communities. He spent two weeks in Idaho before returning to Iowa with an offer of a temporary position with the Bureau of Reclamation, and the promise to be able to return to his current job later. His family agreed, and they moved to Rexburg, Idaho in February, 1977 where he worked until June of 1978. He returned to work with Farmers Home Administration in July of 1978 as the Washington and Boise County Supervisor (Idaho), and moved his family to Weiser, Idaho. In 1982, he transferred to Emmett, Idaho and worked as the Gem County Supervisor. In 1990 Ken transferred to Albany, Oregon after accepting the position as the County Supervisor for Linn/Benton County (Oregon). He retired in 1995 after 32 years with the Federal Government. Ken was a man of many talents. He enjoyed woodworking (Member of the Willamette Valley Woodturners), welding, construction, designing most anything, cooking, computers, collecting, and repurposing. He explored many things in his life, which he enjoyed immensely. His Albany (Oregon) home of 30 years benefited from his many talents, where he built a family room addition, designed and landscaped the new lot, built storage buildings and shops himself. Ken was known for his love of gardening and all things growing. He grew and shared tomatoes his entire life that were known by family, friends, neighbors, and acquaintances as being some of the best they had ever had. He developed many innovative and time-saving techniques to make his gardening easier, and in 1995, he designed his own greenhouse using cattle panels for under $100. He later taught a class on his design and method of construction with the Albany Gardening Club. His yard was full of flowers and whimsy, and part of the Albany Garden Show Tour in 2001. He was a Master Gardener, and served as President of the Albany Gardening Club. Kenneth is survived by his four children, Anita Blair (husband Lee Smith) of Shelton, Washington, Gregory Blair of Wagoner, Oklahoma, Stephen Blair (wife Amy) of Kuna, Idaho, and D’Ann Simonds of Boca Raton, Florida, seven adult grandchildren of Washington State and Idaho, and one great-granddaughter of Kuna, Idaho, along with several extended family, friends and neighbors. He was preceded in death by his three sisters (Lucille, Rebecca, and Patsy) and five brothers (Donald, Allan, Russell, Larry, and Leon) of Kansas and Oklahoma, and his wife of 18 years, Virginia (Frances) Lute Blair in 2019. A graveside service for Kenneth Ray Blair will be Monday, April 18 from 11 – 11:30 a.m. at Elmwood Cemetery in Wagoner, Oklahoma. Pastor Earl Cobb will lead the service. After the service, those who wish can join us at Maple Park in Wagoner around noon to visit. Bring your own lunch or something to share if you would like. You are welcome to attend the graveside ceremony and/or lunch in the park. Anita, Greg, D’Ann, Steve and his wife Amy, three of Steve’s four children – Heather, Jonathon, Kenny, and Kenny’s fiancé Maddy will be there.. We look forward to seeing you.

The family of Kenneth Ray Blair created this Life Tributes page to make it easy to share your memories.