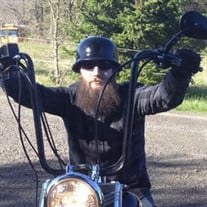 Nov. 9, 1986 — Sept. 14, 2014 Sunday night, our beloved Kevin’s struggle with physical and emotional pain ended when he took his own life. While family and friends supported him and loved him, it didn’t bring him the peace he longed for. Kevin left Corvallis High School in 2005 and joined the U.S. Army. He was in the 1st and 7th Cavalry Units based out of Fort Hood, Texas. He served two tours in Iraq. After fulfilling his contract with the army, he returned home to Corvallis with the rank of Sergeant. When Kevin returned home, he had several ideas of what he wanted to pursue in life, including getting an education to become an X-Ray technician, becoming a helicopter pilot and learning about organic farming. His post-traumatic stress disorder disability, however, made it impossible for him to go to school or work full time. Kevin had a great number of things he enjoyed: his Harley; computers and intense, complicated gaming; the Olive Garden; Local Boyz; stand-up comedy; grossing people out; and his faithful companion, Ruger. Kevin was a loving, kind and thoughtful man. His family, his friends and his military family always were in his thoughts, yet he was frequently plagued with thoughts that he didn’t do enough to show his love. Kevin is survived by his immediate family, John, Linda, Dustin, Amanda, Teza, Bonnie and Ron; his extended family of Ross, Cooke and Smallin; his army brothers and sisters; girlfriend, Megan; friends from a life in Corvallis; and his beloved Ruger. Kevin’s family would like to offer a special thank-you to Sue. We are so grateful, and so sorry. Family and friends will gather at 2 p.m. this Saturday, Sept. 20, at the Martin Luther King Jr. Park Barn (formerly the Walnut Park Barn) at 4905 N.W. Walnut Blvd., to share stories, memories and tears. Parking is limited; please plan to carpool if possible. In lieu of flowers, Kevin’s family requests that donations be made to Heartland Humane Society or to Ruger’s college fund.

The family of Kevin Thomas Ross created this Life Tributes page to make it easy to share your memories.