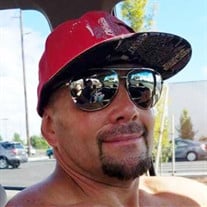 Kenneth Lance Hill April 26, 1974-August 12, 2018 Lance was a devoted and loving father, son, brother, nephew, uncle, cousin and friend. Lance was born and grew up in Corvallis. He moved to Las Vegas for a short time then moved to various parts of Oregon, settling in Albany, where he was raising his 2 younger children with his fiancé,’ Krista Greene, and her 3 children. Lance was a hard worker, diverse and talented. Having a love for big trucks he became an owner/operator of his own truck for several years. He worked for several excavation companies throughout his life as a heavy equipment operator - he was a master at operating any piece of equipment he got his hands on. Most recently he was working for his brother Johnny, at J Gilmour Farm - Lance took great pride being the plant manager, overseeing all aspects of daily operations. Lance was known for his hilarious sense of humor and wit, charismatic and charming personality, the ability to make everyone around him laugh, his crazy shenanigans, his intense high energy, and his big tender heart! Above all, Lance was known for the immense love he had for his children, his family and his friends. He had the ability to make everyone feel special and loved, he truly was one of a kind. Lance enjoyed riding motorcycles, weight-lifting, boating and camping with his family and all family get-togethers. In recent years, Lance attended and was baptized at Hope Church in Albany. He held close his faith in God which carried him through some tough times. Lance was loved by so many and has impacted so many lives. He will be greatly missed. Lance is preceded in death by his grandfathers, Wayde Kent, and Gary Hill. He is survived by his daughters, August Levitt, and Cambria Hill, of Las Vegas, NV; Sutton Comstock, of Baker City, OR; Alyssa Gomez, Gracie Hill, and Peyton Hill, all of Albany, OR; son, Preston Hill of Albany, OR; grandchildren, Colby and Zoey of Baker, OR; his parents, Randy Hill, Carla Smith, and step-father, David Gilmour; grandmothers, Frankie Kent, and Louise Hill. brother, Johnny Gilmour; sisters, Jennifer Smith, Stephanie Seits and Lacie Hill; and numerous aunts, uncles, cousins, nieces and nephews. Family and friends are invited to his viewing 3-5 pm, Thursday Aug. 16th, at DeMoss-Durdan Funeral Home 815 NW Buchanan Ave, Corvallis; and Celebration of Life, 1:00 pm Friday, Aug. 17th at McHenry Funeral Home 206 NW 5th Street, Corvallis. Burial to follow at Oak Lawn Cemetery. Please share your thoughts and memories for the family at www.demossdurdan.com.

Kenneth Lance Hill April 26, 1974-August 12, 2018 Lance was a devoted and loving father, son, brother, nephew, uncle, cousin and friend. Lance was born and grew up in Corvallis. He moved to Las Vegas for a short time then moved to various parts... View Obituary & Service Information

The family of Lance Hill created this Life Tributes page to make it easy to share your memories.