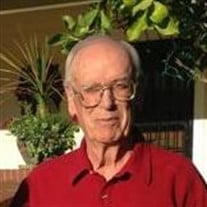 Aug. 1, 1928 — May 22, 2017 Larry was born in Portland on Aug. 1, 1928. He was raised in McMinnville by Jessie Doyle and Earl Fee Hearing, two remarkable individuals who encouraged a sense of ethics, hard work, and determination in Larry at a young age. After graduating from McMinnville High in 1946, Larry joined the Marine Corps where he played basketball, cultivating a passion for athletics and an active lifestyle. After being discharged from the military, he obtained his Masters of Education at the University of Oregon. He then went on to marry Helen and raised three children. Larry started his education career teaching in Valsetz, Oregon. He was one of the highest paid teachers in Oregon due to Valsetz being considered a challenging work locale due to holding a national record for rainfall. This is just one example of Larry's perseverance and determination. He continued in his career as a school principal in the Willamette Valley in both Amity and Pleasant Hill. In 1966, Larry and Helen bought the Gables Restaurant in Corvallis. With their savvy understanding of the local clientele's needs, The Gables grew from a small quiet establishment to a landmark of the community and a successful run business reaching down through the generations. The Hearings transformed the restaurant into a success story of the decades. Ask any former customer about The Gables dining experience. and undoubtedly the chicken bisque soup and croutons are quick to be exclaimed as the best ever tasted. The unique ambiance lent itself to celebrating major life events where couples raised their glasses to one another, diverse minds met for business, groups of friends gathered for the Beaver games in the lounge, and birthdays came with that quintessential Polaroid picture to mark the occasion. Larry and his family were proud to be the culinary cornerstone of the community until the doors closed in 2008 for a well-deserved retirement. A staunch Beaver Booster and Rotarian, Larry was a pillar of support for his community. His unwavering support of Oregon State was matched only with his fervor and unyielding enthusiasm for the Beavers. Rain or shine, he attended countless athletic events as a season ticket holder dressed in his seemingly infinite combinations of orange and black. arry’s active, generous lifestyle was evident in his immaculate landscaping, stubborn individuality, keen intelligence, and big-heartedness that extended from his private sphere into the entire community. To say he will be missed is an understatement, as so many came to rely on his presence as an icon of solidarity and community. A Celebration of Life will be held 5:00 pm, Tuesday, August 1,2017 at the Trysting Tree golf course Club house 34028 NE Electric Road Corvallis. In lieu of flowers, donations can be made in Larry’s name to your favorite local charitable organization.

Aug. 1, 1928 &#8212; May 22, 2017 Larry was born in Portland on Aug. 1, 1928. He was raised in McMinnville by Jessie Doyle and Earl Fee Hearing, two remarkable individuals who encouraged a sense of ethics, hard work, and determination in Larry... View Obituary & Service Information

The family of Larry Doyle Hearing created this Life Tributes page to make it easy to share your memories.