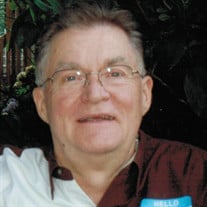 L. Delmar Martin March 18, 1946- Jan. 16, 2015 L. Delmar Martin was born in Flagler, CO. on March 18, 1946 to LaVern and Madge Martin. When Del was five years old, the family moved to Hermiston, OR. Delmar broke his neck July 21, 1962 swimming at Hat Rock Park just off the Columbia River. He graduated Hermiston High School with his many friends in the class of 1964. Del attended Blue Mountain Community College in Pendleton, OR and graduated OSU with a degree in teaching. He taught 7th and 8th grade science at Western View Middle School. One of many things Del did was to start a chess club where his students won several State Championships. Delmar married Elizabeth Kalowski in August, 1990. They had a wonderful life together and loved to travel. New Mexico, Chicago to visit relatives, Eastern Oregon, Arizona, and California were favorite travel spots. Del enjoyed hunting, fishing, shooting, boating, and rabbit hunting with his beagles at E.E. Wilson; he also loved to read and work in his shop. Del was active in Albany Rifle and Pistol Club, Mary’s Peak Hounds Club and the OPVA, Oregon Paralyzed Veterans of America, trap shoot competition guys that were held mostly in California. Del passed away at his home and went to his Creator on January 16, 2015. Del is survived by his loving wife of 24 years, Elizabeth Kalowski, step-sons, Peter and Alex Moeller; his mother, Madge Martin and foster son, Gordon Wordon. He was preceded in death by his father, LaVern Martin. Family and friends are invited to a Celebration of Life to honor Del at 1:00 p.m., Friday, January 30th at McHenry Funeral Home, 206 NW 5th Street, Corvallis. Please share your thoughts and memories for the family at www.demossdurdan.com If desired memorials in Del’s name made be made to www.Oregonpva.org or Mary’s Peak Hounds Club, 800 NW Meadow View Drive, Corvallis, OR 97330.

The family of LaVern Delmar Martin II created this Life Tributes page to make it easy to share your memories.