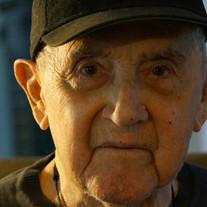 Lawrence Leonard Maynard passed away peacefully after a short illness in his home in Monroe. Lawrence was born Leonardo DeMaio in Piermont, New York to Giuseppe and Laura Maria DeMaio, who had emigrated from Southern Italy to the United States the year before. Lawrence spent his early childhood enjoying the countryside of upstate New York, and playing on the banks of the Hudson River. Later, his family moved to Montclair, New Jersey, where he spent his teenage years. Lawrence’s life was like so many of his fellow members of the Greatest Generation, affected by global events. A talented student in English literature and history, he was forced to leave high school and abandon his collegiate dreams in order to help support his family during the Great Depression. He joined the Civilian Conservation Corps, participating first in the Morris Dam project in Tennessee, and afterwards in New York City, where he had the privilege of being billeted in the base of the Statue of Liberty. It was in New York, in Central Park, that he met his future wife, Rosemary Loccisano, another child of Italian immigrants who was also forced to forfeit her education. They were married in the Catholic faith on June 6, 1936, and settled in New York City. Concerned about escaping discrimination and supporting their growing family, the couple changed their names to Lawrence and Rosemary Maynard to secure employment for Lawrence. Soon after, their domestic life was interrupted by World War II. During the war, Lawrence volunteered for the U.S. Marine Corps, and served for 2 years. For the rest of his life, he would remain a proud ex – Marine, and a staunch patriot. After the war, Lawrence joined the ranks of Italians who found employment in New York’s Garment District, where he would work until his retirement. Both Lawrence and Rosemary worked hard to give their children the precious gift of higher education that was denied them, sending all four of their children to college. They also passed on to their children a love of nature. They took their family on weekly trips out of the crowded, noisy city to experience the freedom and beauty of the seashore; and they filled their tiny city lot with flowers and fruit trees Upon retirement, the couple moved to Tucson, AZ. Always an athletic and vigorous man, Lawrence climbed Mt Lemmon, AZ (9,159 feet) solo to celebrate his 70th birthday. A few years after Rosemary’s death in 2002, Lawrence moved to Monroe, OR and lived his last years with his daughter and son-in-law. His took pleasure in observing Oregon’s natural beauty, and remained an avid and voracious reader until a few months before his death. He is remembered for his generosity to everyone he met, the help he gave to many members of his family, and his love for all children, whom he would often surprise with gifts of dollar bills. He had the knack of inspiring affection in those he met, and was a unique and memorable character. He set an example of success through hard work, and devotion to family and country. He is survived by his son Richard, daughters Dale Casabianca, June Shephard, and Debbie Maynard; grandchildren Louis Casabianca, Amanda Casabianca Whelan, and Mary Maynard; great-grandchildren Alby Whelan and Bernadette Shreve, and great-great-grandchildren Mikenlee and Chanin Shreve. He was preceded in death by his grandson John Casabianca. His family wishes to thank those people who helped to make his last years in Oregon happy ones: his wonderful caregiver Marianna, his understanding doctor Cosimo Storniolo, Dari and Spike, who honored him with poetry and portraiture, and the “Sweet Spot morning gang”, Shirley, Ruby, and Chris, who brightened up innumerable mornings for him. Family and friends are invited to his wake on Friday, July 10, from 5-7pm at DeMoss-Durdan Funeral Home, 815 NW Buchanan, Corvallis. Mass of Resurrection is Saturday, July 11 at 2:00 pm at St. Mary’s Catholic Church, 501 NW 25th Street, Corvallis. Donations in lieu of flowers can be made to Benton Hospice of Corvallis, or The Benton County Library, or the Marine Corps Toys for Tots Program. Please share your thoughts and memories for the family at www.demossdurdan.com

Lawrence Leonard Maynard passed away peacefully after a short illness in his home in Monroe. Lawrence was born Leonardo DeMaio in Piermont, New York to Giuseppe and Laura Maria DeMaio, who had emigrated from Southern Italy to the United States... View Obituary & Service Information

The family of Lawrence Leonard Maynard created this Life Tributes page to make it easy to share your memories.

Lawrence Leonard Maynard passed away peacefully after a short...