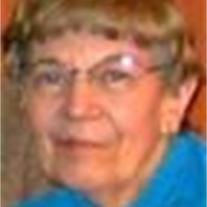 Leaetta Irene Moore of Corvallis passed away peacefully at Good Samaritan Regional Medical Center in Corvallis on Wednesday after a stroke. Leaetta, the only child of John and Wilma Steinmann, was born on May 1, 1933, in Monroe, Wis. Leaetta, who was known throughout her life as Lea to her friends and family, grew up in Monroe where she graduated from Monroe High School. Following high school, she attended the University of Wisconsin at Madison, where she obtained a degree in history education and met her future husband. She also attended summer programs in directing and choir at Westminster Choir College. Lea married Duane Gray Moore on Sept. 12, 1954. They spent time in Georgia while Duane was in the Army and serving in Korea. They returned to Madison, where she taught history at Middleton High School. Duane worked on his doctorate, and together they started a family. They moved to Hawaii in 1962, where Duane had a job at the University. In 1965, they came to Corvallis. Lea loved music and was a great supporter of the local musical community. She formed her own musical group, the Corvallis Singers, a choral group. She started the Corvallis Madrigals, who performed together off and on over the decades. She and her family were active members in the First Presbyterian Church, where she sang in the choir and even directed for a time. Lea was also often involved in local musical theater along with other members of her family. Lea worked for many years at Corl’s Book Shop in downtown Corvallis until it closed. For the past 15 years, she was a friendly face behind the counter at Rice’s Pharmacy. She is survived by her husband of 53 years, Duane Moore, of Corvallis; son Richard, his wife, Rebecca, and their three children Amanda, Sarah and Ian, all of Roseburg; son Mark, his fiancée, Lynn Huggins, and his three children, Leslie, Kayla and Connar, all of Tucson, Ariz.; daughter Nancy and her partner, Jane Henson, of Dobson, N.C.; son Jeff, his wife, Donna, and their two children, Madison and Gabriel of Corvallis; best friends Laurie and Marvin Crocker of Lakeview; and goddaughter Jennifer Chen, her partner, Molly McDermond, and their son, Michael, all of Corvallis. In lieu of flowers, the family would like to suggest memorials in Lea’s name be made to The Heart of the Valley Children’s Choir scholarship fund in honor of her love for music in the community. Contact Carol Nelson at 738-7888. There will be a private family service.

Leaetta Irene Moore of Corvallis passed away peacefully at Good Samaritan Regional Medical Center in Corvallis on Wednesday after a stroke. Leaetta, the only child of John and Wilma Steinmann, was born on May 1, 1933, in Monroe, Wis. Leaetta,... View Obituary & Service Information

The family of Leaetta Moore created this Life Tributes page to make it easy to share your memories.

Leaetta Irene Moore of Corvallis passed away peacefully at Good...