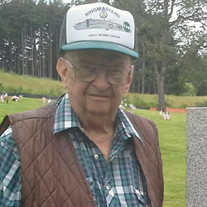 Lloyd W. Giles August 21, 1923 — July 10, 2016 Lloyd “Uncle Buck” passed away peacefully in his home on Sunday, July 10, 2016, at 1:20 p.m. with his children, Laura and Matt, taking care of their dad. Lloyd missed his 93rd birthday by six weeks. He was born Aug. 21, 1923, in Lane, South Dakota. Lloyd is the last remaining son of Myrtle and Leo E. Giles. Lloyd learned the family business of newspaper publishing at an early an early age. He was the youngest son of four boys and one girl. Lloyd’s father was a newspaper owner, sold insurance, was a volunteer firefighter and held other jobs. The Great Depression was hard on the family and had to sell the newspaper business and almost everything they could not get into their 1928 Studebaker. His family packed up into a 1928 Studebaker and moved to Corvallis where Leo found another newspaper to publish in 1931. In 1938 the family settled in Brownsville and his parents published Brownsville Times Newspaper until 1949. Lloyd served in the Army Air Corps during World War II from 1943 to 1945. He flew in a B-24 as a tail gunner with the 491st Bombardment Group, 852nd squadron and is believed to be the last member of his squadron survived. His group flew 23 missions in the European theater and received American Theater Ribbon, EAM Theater Ribbon, three Bronze Battle Stars, and one Air Medal with two Oak Leaf clusters. In later years, after the passing of his wife, he attended two 491st Bombardment Group Reunions in Cleveland, Ohio, and Savannah, Georgia, with a side trip to Nashville, Tennessee. He returned to Brownsville after the service and continued his training in newspaper work. Lloyd married Betty Louise Meredith on Jan. 16, 1953, in Albany at the First Presbyterian Church. For two years he and his wife Betty owned and published the Halsey Review. They moved to Albany in 1958 and bought a house. He worked as a pressman at the Corvallis Gazette-Times and a printer for the Eugene Register-Guard and Albany Democrat-Herald until off-set printing ended. He spent 22 years working at Oremet in Albany in the casting department and then became a Certified X-ray technician until his retirement in 1987. During their 52 years of marriage they had two children: Laura and Matt. They loved camping, hunting, fishing, and rock hounding. They went on many family vacations and called Lincoln City their second home. After retirement they bought a piece of property on the Siletz River. They traveled extensively throughout the Pacific Northwest including a trip back to Lane, South Dakota, with his brother, Bob, and sister Shirley. They loved their grandsons and taught them to play cribbage and took them camping and fishing often on the Siletz River. Lloyd was very active in Elks Club and was Elk of the Month numerous times and Elk of Year once; and member of the American Legion and Rollers RV club. Lloyd lived a full life with hunting, fishing, archery, coin collecting, camera collecting and taking hundreds of pictures, especially of Betty’s garden, playing speed pinnacle with his buddies and rock hounding with his son. Proceeding Lloyd in death was his beloved wife, Betty Meredith Giles; son Lloyd W. Giles II; parents Leo and Myrtle Giles; and brothers Bob Giles, Leonard Giles, Howard Giles and Warren Giles. He is survived by son Matt Giles of Albany; daughter Laura Giles Harmsen, (Ted Harmsen III) of Corvallis; grandsons T.J. Harmsen IV of Denver, Colorado, and Randy Harmsen of Corvallis; sister Shirley Giles Drake of Tillamook; and many nieces and nephews. A memorial service will be at 2 p.m. Tuesday, Aug. 9, 2016, at DeMoss-Durdan Funeral Chapel, 815 N.W. Buchanan Ave., Corvallis (www.demossdurdan.com). Please come and rejoice in Lloyd’s wonderful full life. He will be interred at a later date with his wife at Oak Lawn Cemetery in Corvallis.

The family of Lloyd W. Giles created this Life Tributes page to make it easy to share your memories.