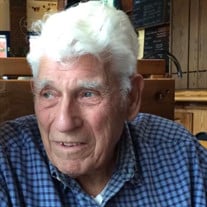 Lloyd Clarence Kasten Jan 26, 1925 - Mar 4, 2021 On Thursday Mar 4, 2021, Lloyd C. Kasten passed away at the age of 96 in his Corvallis home where he lived since 1966. As a carpenter, he built the home where he raised his 7 children together with his wife, Jean Veronica (Stewart) Kasten who passed away at home July 29, 2008. They were devoted to each other since marrying February 9,1957. Lloyd was born on Jan 26, 1925 in Carlsbad, New Mexico to George Dewey Kasten and Louise Odelia Bendel. He was the only son they raised, second oldest amongst 9 daughters. His sisters preceding him in death were Cecelia Hansford of Eugene/Corvallis and Mary Breitenstein and Irene Birkholtz of Stayton. His surviving sisters are Eleanor Baker and Patricia Weder of Corvallis, Frances Rhoner and Rosella Blye of Albany, Carole Graham of Portland and Linda Klein of Redmond. The girls, as Lloyd referred to them, gave him 23 nieces and nephews, together with 8 from his wife’s siblings for a total of 31 and many more great nieces and nephews. After graduating from Carlsbad High in 1942, Lloyd joined the Navy and served in WW2 as a Seabee (Construction Battalion) in the South Pacific stationed in The Philippines and New Guinea. Following the war, he joined his parents and sisters who had relocated to the beautiful green Willamette Valley in Oregon. Lloyd loved the outdoors and was an enthusiastic gardener of vegetables, berries, grapes, nut and fruit trees and flowers, frequently humming while he tended his treasure. He proudly delighted in preparing and sharing his harvest. He was creative, competitive, knowledgeable and enjoyed intellectual challenges. He completed at least one crossword puzzle every day. While he was fiercely independent, Lloyd adored the company of his family and laughed easily. He leaves behind 7 children: Dennis Kasten of Salem, Laurie Clark and her husband Charles of Lake Arrowhead, CA, James Kasten and his wife Christi of Corvallis, Michelle Beaubien and her husband Glenn of Corvallis, John Kasten and his wife Lupe of Aloha, Daniel Kasten and his wife Lisa of Albany, and Thomas Kasten and his wife Kirsten of Portland. He is also survived by 17 grandchildren and 13 great grandchildren. Lloyd will be interred with his beloved wife Jean at Willamette National Cemetery in Portland. A memorial celebration will be held this summer.

The family of Lloyd Clarence Kasten created this Life Tributes page to make it easy to share your memories.