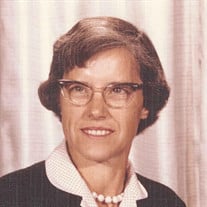 Lois Adelle Rice was born November 5, 1918, to Norval and Jessie (Warner) Rice in Holley, Oregon, a few miles down the Calapooia River from her great-grandparents’ donation land claim. She grew up in Sweet Home and Amity with three brothers, Norman (Bud), Dale and Warren (Corky). Lois graduated from Amity Union High School in 1937. She earned a Bachelor of Arts in 1941 from Linfield College in McMinnville, Oregon, where she waited tables in a café and worked in the kitchen of her dormitory. She recalled being alone in the dorm while her housemates attended church on the morning of Sunday, December 7, 1941. She was listening to the radio and preparing a meal when she learned of the attack on Pearl Harbor. Lois received a Master of Science in Secondary Education from the University of Southern California in 1951. Miss Rice taught high school social studies in Nyssa, Oregon; Bend, Oregon; El Segundo, California, and Cottage Grove, Oregon, where she was head of the Social Science Department and Senior Class Advisor. Lois loved her profession and stayed in contact with a number of former students. She was happy to be invited to several class reunions at Nyssa and Cottage Grove. Lois was ready for a new challenge when she accepted a position at John Adams High School in Portland, Oregon. Adams presented a newly developed and experimental approach to secondary education, and Lois wanted to be involved. She wound up her career at Crescent Valley High School in Corvallis, Oregon, another new school, where she managed the career center. She retired from teaching in 1984. Lois began involvement in the Oregon Education Association as treasurer of the Bend Teachers’ Association. In the Southern Lane County Teachers’ Association, she served as program and legislative chairman, participated on various committees and served as president. In 1963, Miss Rice was chosen as Outstanding Teacher in the South Lane School District. Except for investments in the quest for the perfectly comfortable and serviceable shoe, Lois was frugal and lived simply, saving her money for retirement. After she retired, she was free to splurge on travel. Some of her favorite adventures were the Orient Express route to the Silk Road, a seven seas cruise and a road trip to Alaska. Lois’ family has her travel diaries with daily entries written in tiny script, and dozens of slide carousels. Lois’ great-grandparents came to Oregon by wagon train and settled on a donation land claim along the Calapooia River. Her grandfather, Homer Rice, owned a blacksmith shop in Holley. The second floor of his shop was used as a dance hall. Her father, Norval, built machinery and a number of sawmills, including the first sawmill in Sweet Home. Her mother, Jessie, was a homemaker. Lois’ brother, Bud, served in the army and afterward built sawmills before purchasing a ranch in the Eola Hills where he raised hay, grain and dairy cattle. Her brother, Dale, was also a millwright. Dale had one son, Richard. Lois’ brother, Corky, died in childhood. Like others in her pioneer family, Lois was hard working, no-nonsense, organized, and quietly accomplished. She did not strive to attract attention to herself, she simply worked hard and did the right thing. Lois was an excellent source of family information. She chronicled her life and family history in photo albums and books of family stories. Lois had a generous sense of humor and enjoyed travel and dinners with friends and family reunions. She will be remembered for her practical, calm, sensible and nonjudgmental nature, her excellent memory, and for her appreciation of comfortable footwear. She could be counted on to remember to bring tissues to a funeral and large pots of tea to a family dinner. “Cousin Lois” was a well-loved and much respected member of her family. She will be missed by all of us. Lois passed away on January 11, 2017. She was 98 years old and was predeceased by her parents, three brothers, and her nephew. She is survived by a group of cousins too numerous to list. A memorial service will be held at the First Presbyterian Church in Corvallis on February 2, 2017, at 1:00 p.m. The family plans to gather for a graveside service in Amity this summer. We would like to thank the folks that were so kind to Lois in her last few years -- her caregivers at West Hills Assisted Living, Willamette Springs Memory Care Community, Benton Hospice Service, and the Presbyterian flower ladies. Donations can be made to Benton Hospice Service. Please feel free to share thoughts of Lois on the tribute wall at: http://www.demossdurdan.com.

Lois Adelle Rice was born November 5, 1918, to Norval and Jessie (Warner) Rice in Holley, Oregon, a few miles down the Calapooia River from her great-grandparents&#8217; donation land claim. She grew up in Sweet Home and Amity with three brothers,... View Obituary & Service Information

The family of Lois Adelle Rice created this Life Tributes page to make it easy to share your memories.