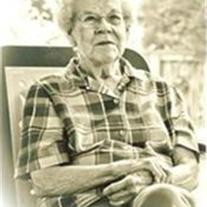 Lola Martha Glass died peacefully Saturday in Corvallis, surrounded by her loving family. Her faithful dog, Obbie, was at her side. Born July 9, 1918, in Woodland, Wash., Lola moved to Philomath, where she attended school and was a member of the basketball and baseball teams. Her wedding to Ivan Chester Glass in 1936 began a 69-year marriage that ended with Ivan’s death in 2006. They lived in the Willamette Valley until 1951, when they moved to Brookings, where they spent the next 13 years. In Brookings, Lola was a member of the Rebekah Lodge and a Home Extension Unit, and was a Past Madam President of the Eagles Lodge. She also sat watch weekly for the Civil Defense. In 1965, Lola and Ivan moved to Corvallis, where Lola worked for the Benton Beauty Shop until her retirement. Lola and Ivan traveled extensively, traversing the United States in their motor home, and visited several foreign countries with their daughters and husbands. Lola’s great love for gardening, preserving and cooking began in the winter with a seed catalog. The results of her bountiful garden were shared with family and friends. On her 75th birthday, the family published a cookbook in her honor. She and Ivan also loved camping with their family, often with some of their 15 grandchildren in tow, creating many fond memories. They particularly enjoyed their many trips to the Oregon Coast, often visiting Waldport. With their crab pots set, they awaited their catch. Lola attended water aerobics at Timberhill Athletic Club until she was 92. Lola is survived by her five daughters and their spouses, Beverly and Denny Fadling of Medford, Janet and Larry Brown of Payson, Ariz., Sandy and Bill Johnson of Corvallis, Joyce and Lynn Monroe of Phoenix, Ariz., and Debbie Glass of Colfax, Wash. She had 15 grandchildren, 26 great-grandchildren, and five great-great-grandchildren. A memorial service will take place at 1 p.m. Wednesday, Dec. 7, at DeMoss-Durdan Funeral Home. A family celebration of her life will be held in the summer. In lieu of flowers, memorial donations can be made to Heartland Humane Society or a charity of your choice.

Lola Martha Glass died peacefully Saturday in Corvallis, surrounded by her loving family. Her faithful dog, Obbie, was at her side. Born July 9, 1918, in Woodland, Wash., Lola moved to Philomath, where she attended school and was a member... View Obituary & Service Information

The family of Lola Glass created this Life Tributes page to make it easy to share your memories.