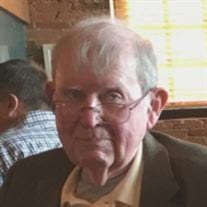 Louis (Lou) B. Pankratz Lou died peacefully at home in his sleep just a few months past his 90th birthday due to complications of pancreatic cancer. He was born in Oklahoma City, Oklahoma and graduated from Cordell High School in Oklahoma in 1948. In 1953, while attending Fresno State, he was drafted into the Army and spent his 2-year induction time in the El Paso - Albuquerque area. Upon his honorable release into the Army Reserve in 1955, he soon graduated with his BS in Chemistry from Fresno State and immediately went to work for the U.S. Department of the Interior, Bureau of Mines in Berkeley, California. Shortly after that, he met the love of his life Pharaba (his landlady’s daughter). They were married in 1960 and had two daughters, Jessica and Elissa. In 1966 the family moved to Albany, Oregon when Lou transferred to the Bureau of Mines, Albany Research Center, where he worked in the Thermodynamics Laboratory as a Research Chemist until his retirement in 1987. During his career he published the results of his thermodynamic properties studies in numerous Bureau reports, papers and books. Family vacations consisted of weekend camping trips to the Oregon Coast to go fishing, crabbing, clamming and the obligatory stop at Mo’s for clam chowder. Longer trips included the British Isles and several Christmas vacations at Ft Myers Beach, Florida. During the 70’s and 80’s, Lou was a big part of Albany Civic Theater. He acted in several plays, stage managed, built and tore down sets, was on the board and managed the box office. He loved the time he spent there along with the people he met. After he retired in 1987 cooking became Lou’s passion. Visitors would typically find him in the kitchen experimenting with a new recipe, revamping an old favorite, making jam, canning, drying, freezing or juicing the over-abundance from his annual garden. Lou will be fondly remembered for his caring kindness, laughter and that twinkle in his eye just before he made a joke. He is survived by his wife Pharaba, daughters Jessica and Elissa (Nick), nieces Marta and Evelyn, nephews Greg, Patrick, Jesse and Gabe, brother-in-law Scott (Susan) and sisters-in-law Alva, Kelly (Chris), Lea (John) and Jackie. He was preceded in death by his father, Walter, mother, Lena, and brothers Walt and Bruce, as well as brother-in-law, Randy. The family is very grateful for and thanks: • The doctors at Stanford University Medical Center for their caring and expertise with surgical treatments that gave Lou a few more years of quality life. • Lou’s doctors at Samaritan Health Services who supported Lou throughout the years. • The incredible crew at Albany Fire Department, Station 14, for their repeated professional service when Lou needed a quick rescue. • Evergreen Hospice Service staff for their amazing dedicated and caring work – doing the needed work/care that often doesn’t get appreciated as it should. • The greater community for their support and help during the difficult and often overwhelming times, especially Conifer House and Prestige Senior Living West Hills. A private celebration of life will be held in 2021. Donations in Lou’s name may be made to Albany Civic Theater in lieu of flowers.

Louis (Lou) B. Pankratz Lou died peacefully at home in his sleep just a few months past his 90th birthday due to complications of pancreatic cancer. He was born in Oklahoma City, Oklahoma and graduated from Cordell High School in Oklahoma in... View Obituary & Service Information

The family of Louis B. Pankratz created this Life Tributes page to make it easy to share your memories.

Louis (Lou) B. Pankratz
Lou died peacefully at home in his sleep...