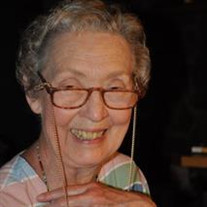 Louise Isabell (Morrison) Van Vliet In the early morning hours of December 26th, Louise Van Vliet left this world to join those kind and special servants in heaven. She was surrounded by her loving children and husband. Louise was born to Allan and Ruth Morrison on March 3,1931 in Helena, Montana. Her father, a mining engineer, was in charge of a gold mine outside of Helena. She was the middle child between an older sister and younger brother. World War II moved the family to Spokane, Washington. Another move with Alcoa moved the family to Portland, Oregon where Louise attended and graduated from Grant High School. She then followed her sister to Oregon State College, where she spent her freshman year in Waldo Hall. The lasting friendships made there and in Kappa Kappa Gamma sorority would last until now. On a cool fall night in 1950 she had a blind date with the person who would become her love and mate for sixty-seven years, Tony Van Vliet. While he completed his Forestry degree in December 1952, she completed her BS degree in Education in June 1953. When the Army decided to send Tony to a Special Intelligence Unit in Germany rather than Korea, they decided to get married on August 1, 1953. She had signed a one-year teaching contract in Wenatchee, Washington and would not abandon her commitment. She joined Tony in June 1954 and they enjoyed living in small town near Heidelberg. The two-room apartment became the chief stopping place for Oregon State friends. Her single hot burner meals were famous! There were several short trips to London, Holland, and the wine centers. In 1955, released from the Army, Tony and Louise drove cross-country back to Corvallis, where her working years as a student in the Memorial Union yielded a two- room apartment above the garage of beloved Major Ed Allworth and “Grammy”. The Van Vliet’s first child, son Dan, was born there. What was to be a short period of two years in Corvallis changed when Tony was asked to teach and the need for a house with two bedrooms became a must. Louise gave birth to Susan and then Mary and that very small house lasted until they moved to Cottage Grove for a leave of absence. Returning to a new house in the Fall of 1960, the growing family was back in Corvallis and Louise was fully engaged in the community as a substitute elementary teacher, active in the Presbyterian Church activities, and with her sister became lead teachers for Parenting Children. Son Bill was born in 1962 and in that year she helped start a cooking group for foreign students’ wives. It was here that she made two of her dearest friendships that continued until now. In 1970, Louise, Tony and Eileen Jeffries decided to purchase a parcel of forest land along Lobster Creek in rural Benton County. This property became the long lasting Mecca loved by all the generations that have come to camp there. Louise felt it was the most important gift of love they could bestow upon their children, and families to come! As her children grew into their teens, she became a partner in a small store that specialized in outdoor fabrics and sewing kits for everything from ski jackets to travel bags for bikes. The Rain Shed in Corvallis was the first to introduce a new product called “Goretex” to those wanting waterproof clothing in the area. She was also an early Board Member of Grace Center, an adult day care center. In January 1989, Louise joined Tony for his last three sessions in the Oregon House of Representatives. Louise became his secretary and was the wise sounding board as the drove each day to Salem. As Ways and Means work loads increased, she became the gatekeeper for constituents, lobbyists, and visitors. Her favorite job was guiding the two student interns on the ways of the State Capitol. With a sigh of relief they could return to a somewhat normal life. Tony had retired from OSU, and the Church was involved in building renovations plus designing an addition. Louise was involved with the committee to select the architects. Grandchildren had started to arrive in 1984 and trips to Iowa and Portland increased to the joy of being a Grandma. She always said that is what gave her life meaning. Squeezed in between were trips to Italy, Germany, Holland and Scotland. Scotland had special meaning by going to the tip of the Isle of Lewis where it was the clan home of the Morrison’s. Alaska, Elderhostel’s, annual trips to Gearheart filled in over the years between OPB and State Board of Higher Education festive events. Louise’s love of Montana materialized into an annual ten-year venture with Bill and Margaret’s family. In 2014, great grandchildren began to arrive and add to her joy. She was struck down with double pneumonia in 2015 and we almost lost her. She was given these extra years of time to enjoy the best she could from family events, church, trips to Lobster Creek, and “Fitness Over Fifty”. The closing weeks she fought losing her sight, mobility, and some memory—but never her kind attitude and love. She was preceded in death by her parents, her sister Marybelle GrosJacques, and her brother, Don Morrison. She is survived by her devoted husband of 67 years, Tony, her sons Dan of Philomath, Bill (Margaret) of Portland, daughters Susan Licht of Corvallis, Mary Austin of Portland, 7 grandchildren and 7 great-grand children, all of whom she adored and loved. A Memorial Service will be announced at The First Presbyterian Church of Corvallis when services commence again. In lieu of flowers, donations may be made to the Corvallis Presbyterian Church, The Grace Center, 980 Spruce St, Corvallis, 97330, and The Boys & Girls Club, 1112 NW Circle, Corvallis.

Louise Isabell (Morrison) Van Vliet In the early morning hours of December 26th, Louise Van Vliet left this world to join those kind and special servants in heaven. She was surrounded by her loving children and... View Obituary & Service Information

The family of Louise Isabell VanVliet created this Life Tributes page to make it easy to share your memories.

In the early morning hours...