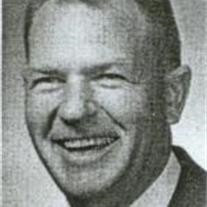 Lyall F. Taylor, 87, passed away on Saturday in Corvallis. He was born December 29, 1922 in Marengo, Iowa, to William B and Rose Taylor, and was raised on a farm near Cedar Rapids, Iowa. Lyall graduated from Iowa State University in 1948 with degrees in Entomology and Zoology. In 1951 he obtained a doctorate degree in Entomology at the University of Wisconsin. Lyall spent most of his professional life working for the DuPont Company where he worked both nationally and internationally in the development and marketing of agricultural chemicals. From 1969 to 1972 he served as Associate Director and Director of the International Plant Protection Center at Oregon State University. He was a member of the Entomological Society of America, the Weed Science Society of America and the American Phytopathological Society. He retired in 1982 and moved to Philomath in 1984. In retirement he enjoyed being a master gardener and was an avid fisherman. Lyall is survived by his wife Georgann of Philomath; sons, David of Sonora, Calif., Douglas of Santa Clara, Calif.; daughter Barbara of Roseburg; grandchildren, Matt of Scranton, Pa., Brooke of Albany, and Sonressa of Brookings; four great-grandchildren; step-children Pam Zinn and husband Greg of Tualitan, and Doug Dobie and wife Mary of Corvallis; step-grandsons, Ryan of Seattle, Wash., and Michael of Corvallis, Ore; and brother Donald Taylor and wife Mary Alida of Cedar Rapids, Iowa. Lyall was preceded in death by brothers Clifford, Eugene, Marvin, and sisters Thelma and Erva. Of particular note is the fact that of the seven children and three-stepchildren in Lyall’s family, seven served in World War II. Lyall himself served as a communications officer on an aircraft carrier. Lyall was a friend to all he met and enjoyed sharing his love for the outdoors. At his request no service will be held at this time. The family plans to hold a private memorial in late spring at one of Lyall’s favorite and beautiful fishing areas. Memorial contributions can be made to a charity of one’s choice in care of DeMoss-Durdan Funeral Home and Crematory, 815 NW Buchanan Ave., Corvallis, OR 97330.

Lyall F. Taylor, 87, passed away on Saturday in Corvallis. He was born December 29, 1922 in Marengo, Iowa, to William B and Rose Taylor, and was raised on a farm near Cedar Rapids, Iowa. Lyall graduated from Iowa State University... View Obituary & Service Information

The family of Lyall Taylor created this Life Tributes page to make it easy to share your memories.

Lyall F. Taylor, 87, passed away on Saturday in Corvallis.
He...