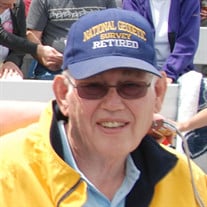 Lyle Lee Riggers passed away on November 12th, 2021 at the age of 84 in Corvallis, Oregon. He passed peacefully and comfortable with his son Brian, daughter-in-law Bobbi and grandson Logan by his side. He lived a long and full life and will be remembered for his adventurous spirit and witty sense of humor. Lyle grew up in small town Pierce, Idaho hunting, fishing, and playing sports. He excelled in academics and was the valedictorian of his graduating class. A career as a geodetic surveyor with the federal government supported his love for travel and adventure in California, the Pacific Northwest and his favorite place; Alaska. Lyle was a certified SCUBA diver who dove both professionally and for recreation. He often engaged his children in these pursuits. Lyle married his high school sweetheart, Bette Fry. Early in their marriage, Lyle accepted a federal job while attending college. They moved to Southern California and began raising a family. They eventually moved to Bothell, Washington where their children Alice and Brian finished high school. Years later, Lyle and Bette were transferred to Salem, Oregon where Lyle finished out his career. Bette passed away in 1994. Lyle married Beverly Spooner and they settled into retired life in Mill City, Oregon. Lyle is survived by his son Brian (Bobbi) Riggers, son-in-law Wyatt Tonkin, sister Anita (Paul) Seely, brother Ray (Carol) Riggers, five grandchildren: Shea (Staci) Tonkin, Tyler (Aneta) Tonkin, Janae (Brian) Vogan, Brie (Ryan) Thompson, and Logan Riggers, and four great grandchildren: Josh & Brielle Vogan and Lennox & Jax Tonkin. Lyle was preceded in death by his first wife Bette (1994), daughter Alice (2017), and wife Beverly (2019). Beverly had three children: Deborah (Vance) Voyles, Terry (Candace) Spooner, and Susan (Wayne) Streight, so together Lyle and Beverly enjoyed the company of numerous grandchildren and great grand children. They especially loved watching grandkids participate in athletics, and camping and touring with extended family. Lyle will be honored during a grave side service at 11:00 on Monday, November 29, 2021 at Pinecrest Memorial Cemetery in Sandpoint, Idaho. A post burial lunch gathering will be held at Connies in Sandpoint at 1:00. Additional information can be found at www.demossdurdan.com 541/754-6255

Lyle Lee Riggers passed away on November 12th, 2021 at the age of 84 in Corvallis, Oregon. He passed peacefully and comfortable with his son Brian, daughter-in-law Bobbi and grandson Logan by his side. He lived a long and full life and will... View Obituary & Service Information

The family of Lyle Lee Riggers created this Life Tributes page to make it easy to share your memories.