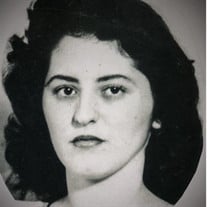 Mary Theresa Duvall, 86, of Corvallis, passed away on October 18, 2019, at her home, surrounded by her children. Theresa was born on July 16, 1933, in Honolulu, Hawaii, to David and Alice Gomes. She was proud of her Portuguese heritage, both sets of her grandparents having immigrated from the old country. She attended Sacred Hearts Academy, a Catholic school in Honolulu, and then continued to St. Francis Academy. Theresa was a good student and was proud of once winning an all-school essay contest. However, she did have her moments. Theresa occasionally hid a comic book inside her textbook. Nuns were a little more freewheeling back then, and they weren’t shy about throwing a ruler at a wayward pupil. Theresa got to experience this firsthand. As a young girl, Theresa loved to ride the bus to the beach with her mother and neighborhood kids to body surf and enjoy egg salad sandwiches. She attended early morning mass every Sunday with her family. In fact, on Sunday morning, December 7, 1941, her family stepped out of Our Lady of Peace Cathedral, and her father pointed toward planes flying over Pearl Harbor and said to his wife, “Look, Alice, that’s just like the real war.” Of course, when they arrived home and turned on the radio they realized the gravity of the event. Their lives were dramatically altered. She spent most of World War II on the island and had haunting memories of the air raid sirens going off and having to race to the underground shelters. After graduating from St. Francis Academy, Theresa worked in a local drug store. Around this time, representatives of two separate modeling agencies approached her to work as a model, but she told both she wasn’t interested. It was also around this time that she met a handsome young sailor, Hubert Duvall, from Mississippi, at a local skating rink. She was smitten. After dating for two years, they married and embarked on a journey that took them from the South Pacific to the Deep South, and finally to settle in the Pacific Northwest. Theresa and Hubert were married for almost 60 years. Theresa was a devoted mother and loving wife. She enjoyed needlework, painting, listening to music, crocheting, reading biographies, and helping her husband with their rental properties. She raised her children with a healthy dose of good old-fashioned Catholic guilt, and she wasn’t afraid to take off a slipper and apply a well-deserved swat on the backside. Her husband and children worshiped her. Theresa was preceded in death by her husband, Hubert, in 2014. She is survived by their four children, Sandie Blaha (Steve), of Beaverton, Tanya Erickson (Craig), of Tustin, Michigan, Hugh Duvall (Julie), of Eugene, and Rob Duvall (Stephanie), of Corvallis; 10 grandchildren; and five great-grandchildren. Family and friends are invited to her service, 12:00 Noon, Saturday, October 26, 2019 at DeMoss-Durdan Funeral Home, 815 NW Buchanan Avenue, Corvallis, followed by a burial at Oak Lawn Memorial Park, Corvallis. Please share your thoughts and memories for the family at www.demossdurdan.com/

Mary Theresa Duvall, 86, of Corvallis, passed away on October 18, 2019, at her home, surrounded by her children. Theresa was born on July 16, 1933, in Honolulu, Hawaii, to David and Alice Gomes. She was proud of her Portuguese heritage, both... View Obituary & Service Information

The family of M. Theresa Duvall created this Life Tributes page to make it easy to share your memories.

Mary Theresa Duvall, 86, of Corvallis, passed away on October...